Chick-fil-A Foundation awards $20,000 grant to Play for All Park 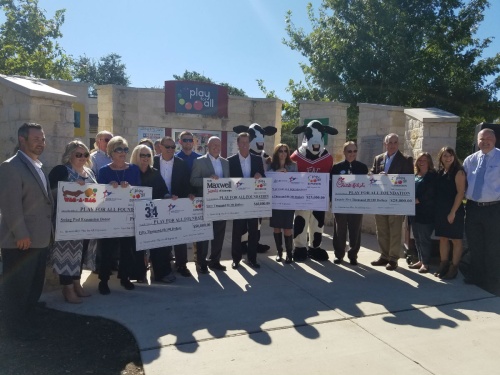 Chick-fil-A has previously made donations to Play for All Park.

On Giving Tuesday, Chick-fil-A announced it would be awarding the Play for All Park in Round Rock with a check for $20,000. Local Chick-fil-A employees initially surprised the park's project team with a check at their grand re-opening celebration Nov. 17.

The park has been undergoing an expansion for the past several months to include new play areas and pods, including one pod that resembles a drive-thru Chick-fil-A restaurant in the park's Village Pod section.

Play for All Park was competing as a finalist in the Chick-fil-A True Inspiration Awards this fall. In the spirit of remembering the restaurant's founder Truett Cathy, the awards recognize organizations around the United States that help inspire and motivate future leaders.

The city of Round Rock invited local residents to download the Chick-fil-A phone application and vote for the Play for All Park expansion project.

Central Texas Table of Grace ultimately won the $75,000 grant to support its mission of providing emergency housing for displaced children. An additional 21 organizations also won grants from the foundation.

“These individuals and organizations embody our founder Truett S. Cathy’s generosity and dedication to service. We admire their courage, hard work and commitment to helping young people dream big," said Rodney Bullard, vice president of community affairs for Chick-fil-A and executive director of the Chick-fil-A Foundation.
SHARE THIS STORY