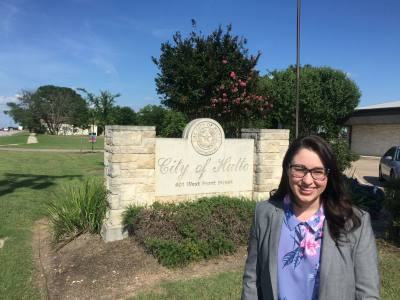 Jones said a national search and interviews made it clear their top choice was Singh, interim assistant city manager since March 23. Singh joined the city in September and has been promoted three times. Before she was interim assistant city manager, she was the executive director of engineering and public works, responsible for a $6 million budget and managing 23 employees.

“When Odis started talking to me about the opportunity, I was excited to take on a bigger role with the city,” Singh said. “I agree with Odis’ vision for growth and I’m happy to have the opportunity.”

Jones said Singh was “at the table” for the major development projects the city recently announced, including the new business and industrial park and the mixed-use development for the Co-Op at the Gin land.

“She has been there for some of the biggest deals in the region the last six months,” Jones said. “She has done an awesome job and has become someone I trust, the council trusts and she has shown an impeccable ability to navigate us through some very difficult transactions. She has saved the city several million dollars and will be a very valuable leader on our team.”

Jones said the changes he has made has strengthened the city into a position to grow.

“Soon you’ll see roads being built, buildings rising out of the dirt,” Jones said. “The economic impact of us taking care of our infrastructure will be because of the good solid work of our team.”

Prior to joining the city of Hutto last September, Singh worked for the city of College Station as an assistant city engineer, and most recently as transportation planning coordinator. During her time in College Station, she was elected to the chair of the Bryan-College Station Metropolitan Planning Organization’s Technical Advisory Committee where she advocated for several regional transportation traffic improvements with the city, successfully negotiated for approximately $2 million dollars in traffic improvements by developers, updated the city’s thoroughfare plan, implementing a new context-sensitive approach. Singh also served on the Brazos Valley Council of Governments Regional Transportation Planning Committee.

“Danielle will help us diversify our economy and reach our overall goals,” Jones said. “We have a great leadership team and we can see some of these private/public projects blossom and help strengthen our city going forward.”

The assistant city manager works under the general guidance and direction of the city manager. According to the city, key responsibilities include assisting in planning, coordinating and directing work regarding the Hutto’s budget, assists in economic development and revitalization of downtown and assists with public outreach.

Singh and her husband, Shailen, have three children, ages 6, 4 and 19 months. She received her bachelor’s of civil engineering degree from Texas A&M University, with a concentration in transportation and land development.

Singh is the third assistant city manager since Jones joined the city of Hutto last November.

In December, Assistant City Manager Micah Grau left Hutto for the same position at the city of Buda. In January, Jones appointed Melanie Melancon, the city’s finance director and controller, to the position. On Feb. 24, Jones announced Melancon was no longer employed by the city.
SHARE THIS STORY