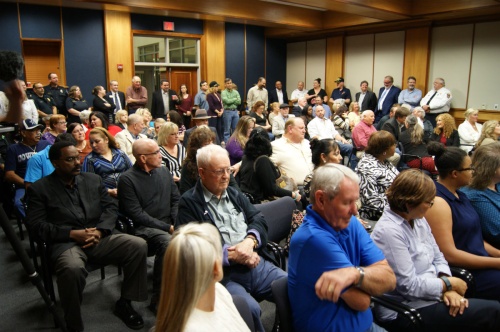 A large crowd gathered in Pflugerville to see the new mayor and city council member receive their oaths of office.

There’s a new mayor in Pflugerville for the first time since May 2007.

Victor Gonzales took the oath of office after he was introduced by the outgoing mayor and Pflugerville businessman Jeff Coleman, who is leaving due to term limits.

State Rep. Celia Israel administered the oath for Gonzales, who grew up in Pflugerville and served as a councilman from 2006-15.

Gonzales thanked many supporters, including his mother in attendance, a graduate of Pflugerville High School.

“I grew up right behind city hall,” Gonzales said. “It’s going to be a challenge, but a great challenge.”

Coleman gave the oath of office to Doug Weiss, a new city council member elected over Victor To on Nov. 8.

“When I moved here, I knew it was a great place to live,” said Weiss, who has served the Pflugerville Community Development Corporation board for eight years. “I am here to serve and I’ll do my best."