Statue of Nolan Ryan unveiled; foundation to move to Round Rock 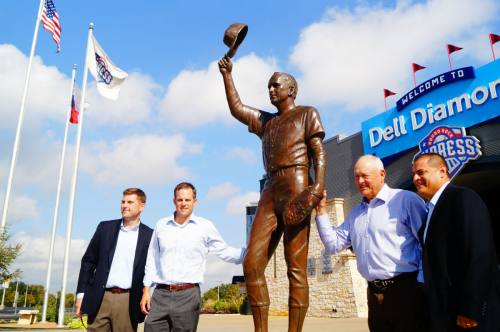 A copper statue of Nolan Ryan was unveiled at the Dell Diamond.

A copper statue of Hall of Fame pitcher Nolan Ryan now graces the entrance of The Dell Diamond in Round Rock. The statue was unveiled at a ceremony Tuesday, where it was also announced that the Ryan family will be moving the headquarters of their Nolan Ryan Foundation to Round Rock in January. A copper statue of Nolan Ryan was unveiled at the Dell Diamond.[/caption]

Nolan Ryan, along with his son Reese Ryan, were present at the unveiling and spoke of the decision to move the foundation to Central Texas.

“I think it will be able to help us do things jointly between the foundation and the ball club and to bring more focus on the foundation here,” said Nolan Ryan. “I live here in Central Texas, so it will be more convenient from a board standpoint and also for me.”

Ryan lives in Georgetown, and he explained that with his family’s involvement with the Round Rock Express and business dealings in Central Texas, moving the foundation to Round Rock made sense.

“Round Rock is very excited to have the Nolan Ryan Foundation officially in Round Rock. Nolan and his entire family have been such an integral part of the City for so many years, and have literally helped shape the community. We are very thankful for their many contributions to our quality of life, and look forward to their continued involvement,” said Mayor Alan McGraw in a statement.

And community involvement is something that the Nolan Ryan Foundation knows something about. According to their website, to date the Ryans have contributed $750,000 to youth, education and community development programs.

“We are in the process of developing our strategic planning and aligning. We are going to continue to focus on education, youth and development. We have some programs starting in the works, and we are excited to be announcing that in January 2017,” said Desa Swaim, Executive Director of the Nolan Ryan Foundation. “They’ve given scholarships in Alvin, and I hope that we can continue and expand that in Central Texas, whether it's universities or trade schools, and help give kids opportunities to get the education that they want; and if it is help in athletics, we will be able to do that as well.”

Round Rock City Manager Laurie Hadley said that having the Nolan Ryan Foundation headquarters in Round Rock will provide opportunities that the community has never had before.

“The fact that they can use the vast resources they already have with the Round Rock Express and Ryan Sanders Baseball means they’ll be able to make a bigger impact on the community, and that’s a win for everybody,” Hadley said.

The Ryan family has made efforts over the last year to move not only the Nolan Ryan Foundation to Central Texas, from its current home in Alvin, Texas, but also the Nolan Ryan Exhibit that was housed at Alvin Community College.  The Texas Sports Hall of Fame took possession of the exhibit items in March and will display them in a dedicated space at their facility in Waco.