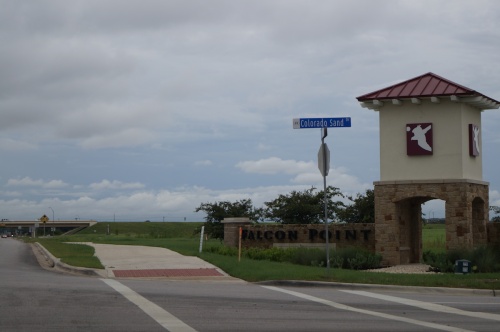 Developers have proposed zoning changes at the northeast corner of Pflugerville Parkway and SH 130, near the Falcon Pointe neighborhood, that would allow for a hospital to be constructed. The Pflugerville Planning and Zoning Commission is looking at possibly zoning a tract of land for, among other uses, a hospital.[/caption]

A proposed zoning change in Pflugerville could open the door in the coming weeks for the city's first hospital at a property off SH 130.

The Pflugerville Planning and Zoning Commission will consider a proposed application Sept. 19 to zone property for a possible hospital and other uses at the northeast corner of Pflugerville Parkway and SH 130, behind the Falcon Pointe neighborhood.

An amendment to update the 148.55-acre property's development regulations was introduced to the commission Aug. 1. The property's planned unit development, or PUD, regulations, would be expanded upon to allow a hospital, medical office, medical facility and/or traditional office uses without any limit to the total square footage. The change would also allow for a convenience store with gas pumps.

P&Z tabled the amendment at the Aug. 1 meeting over concerns about the gas station and its proximity to the Primrose School of Pflugerville at Falcon Pointe. Members cited the intention of giving the property owner time to work with the school on where the gas station would be situated. The land is owned by Terrabrooke Falcon Pointe L.P.

Pflugerville's staff recommended approval of the proposed rezoning, stating "the proposed land use amendments to include expanded medical and retail opportunities are appropriate for the area due to its location along SH 130 and a major arterial roadway and is generally in accordance with the 'Employment Center' concept within the Comprehensive Plan."

If the commission approves the amendment Sept. 19 it will go to City Council for first reading Sept. 27 and final approval Oct. 11.

Mayor Jeff Coleman said there is no deal to build a hospital in Pflugerville at this point, but the city has been trying to bring a hospital to the city for 10 years. He said a 2009 health care study showed the city needed to attract urgent care clinics and freestanding emergency rooms before actively pursuing a hospital. Since that 2009 study, two urgent care clinics and three freestanding ERs have opened in the city.

"[A hospital would] provide a place for people to stay in town if they need that kind of care: emergency or acute," Coleman said. "Beyond that it's an economic development driver."

Amy Madison, Pflugerville Community Development Corp. executive director, said it is important for the city to zone for a variety of uses as it grows including a possible hospital.

"The size of our city and our growth indicate it won't be long before our city will be a location for added health care facilities," Madison said. "An important part of a community's life cycle is health care, and it's important to have zoning for that."

Community Impact Newspaper reached out to the three hospitals with a local presence about a possible Pflugerville location.

Baylor Scott & White Media Relations Manager Katherine Voss sent a statement stating, "We at Baylor Scott & White are constantly evaluating opportunities to grow appropriately to better serve the community. We have nothing new to announce at this time.”

Seton Healthcare Family sent a statement from Greg Hartman, chief of external and academic affairs, stating, "Seton is always looking at opportunities to more fully meet the healthcare needs of Central Texas, both through traditional medical facilities, as well as more convenient locations, like convenience care clinics in retail shopping stores and via telemedicine. While there will surely be new Seton facilities built in the future, we don’t comment on speculation regarding where new facilities will be located."

Denise Bradley, vice president of communication & community affairs for St. David's, said, "St. David's HealthCare is always evaluating a variety of opportunities for growth in Central Texas. As a policy, however, we do not disclose growth strategies before they are finalized."