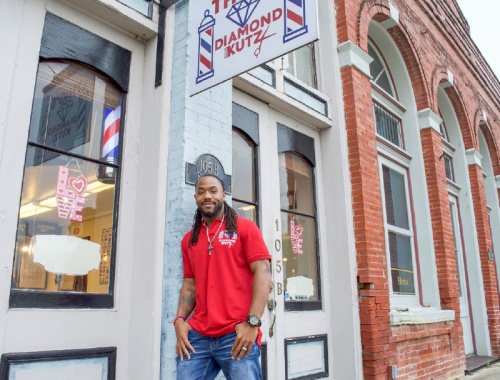 William Thigpen, owner and proprietor of Thig’s Diamond Kutz in downtown Hutto, was drawn into his passion for hair cutting at the age of 9. As a child, Thigpen cleaned up his own hair after his step-father gave him a “chili bowl” cut.

“If you don’t know what a chili bowl haircut is, it is the worst haircut ever on Earth,” Thigpen said.

Only a couple of years later, Thigpen was cutting hair as a hobby for clientele. Thigpen earned his barber’s license at 20 years of age and has been professionally cutting hair for two decades since.

“Hutto was a place that needed a barbershop. It is an up-and-coming city. I surveyed this land, and this was the perfect place to put a barbershop,” Thigpen said.

Thig’s Diamond Kutz offers a menu of haircut options and styles for men, women and children, including specials that cover beard trims, razor shaves and hair washes. Thigpen states that tapered cuts, where the barber gradually changes hair from one length to the other, is the most common cut provided at Thig’s.

History also holds a special place in Thig’s, according to the founder. Throughout the month of February, Thig’s is decorated with important figures from African-American history, such as Martin Luther King Jr. and Langston Hughes. Thigpen said his shop is the first black-owned barber shop in Hutto and the first multicultural cuttery in downtown Hutto’s history.

“If you don’t know your history then you can’t pay homage to those who paved the way before you,” Thigpen said.

Thigpen said the barber shop is thriving and looking to expand in the near future with possible additional locations in Hutto and Taylor on the horizon. A Thig’s barber college is also potentially in the works. Thigpen said he hopes to provide careers and build up entrepreneurs in the barber industry.

The pinnacle of success, according to Thigpen, is the ability to give back to others and support your community. Thig’s holds annual backpack drives for local underprivileged children and hosts charity drives during the holiday season.

“We’re always in the community trying to help out because I grew up poor, and I know how it is to not have,” Thigpen said. “I just have it in my heart to be a servant to the community. That is what gives me joy.”