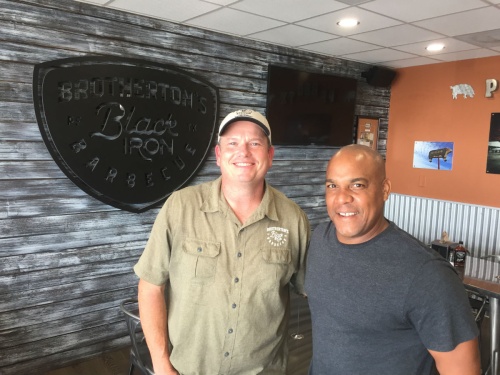 John Brotherton and Tre Dotson will open Liberty Barbecue in Round Rock.

A new business is coming to downtown Round Rock, led by two longtime restaurant owners.

John Brotherton and Tre Dotson have joined with partners to start Liberty Barbecue, which will occupy the former Fire in the Hole Pizza space at 103 E. Main Street.

The wood-fired pizza oven will remain while other construction will take place to update the sit-down service restaurant that will seat approximately 80 people. A grand opening target date is Sept. 1. “We both have appreciated each other’s restaurants,” said Dotson, owner of Tortuga Flats in Round Rock for five years until it recently closed. “We started talking a while ago about working together. When we came back to talking about barbecue, who better to partner with?”

Brotherton once owned a barbecue joint in downtown Round Rock, on the opposite side of Main Street from the new restaurant he and Dotson will lead.

“The timing probably wasn’t right,” Brotherton said of the original try six years ago. “It is now.”

Liberty Barbecue will combine the best of both worlds from the partnership, Brotherton said. Dotson’s restaurant was known for weekend brunches, diverse menu and salsa recipe that will carry over to the new restaurant. Brotherton, who enjoys testing barbecue all over the state of Texas, brings locally-owned and operated barbecue just a few miles north of his popular restaurant in Pflugerville.

Dotson said he bounced the name Liberty Barbecue off Brotherton as he looked for properties on Liberty Street in Round Rock. While they ended up on Main Street, the name stayed. Brotherton liked it because he is from Liberty, Texas. And announcing the new restaurant on the Fourth of July seemed perfect.

While the pizza ovens will remain for specialty flatbreads, a full menu of food will include a variety of items along with barbecue. There will also be a full bar with craft drinks, craft beers and perfect drinks to complement barbecue. Special events like Taco Tuesdays and large to-go orders for breakfast tacos will be available mornings.

“We will have awesome people in place and great food,” Brotherton said, recognizing the efforts of other businesses in the community. “There is a lot of good food here. We want to go a little more upscale and incorporate some of the best of both of our restaurants without duplicating. It’s perfect timing for us.”