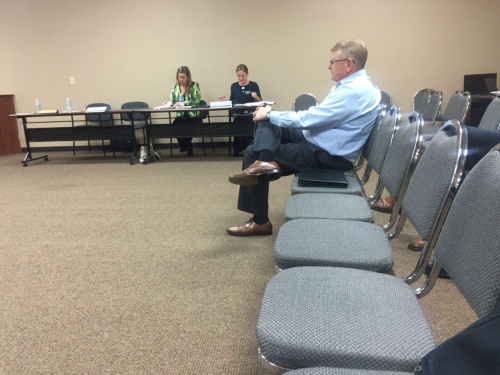 Tim Chase signed a separation agreement with the newly-appointed Hutto Economic Development Corporation Board of Directors.

At Tuesday’s Hutto Economic Development Corporation special meeting, the Type A board of directors went into executive session to discuss the future of corporation president and CEO Tim Chase's position with the corporation.

After 99 minutes of deliberation, the board voted 5-2 to accept a separation agreement with Chase.

“We have an agreement and we’re going to retire and look forward to it,” Chase said as he left city hall with his wife after the vote. “We’re going to spend time with our grandchildren.”

It was the second meeting since the new Type 4B board was elected by Hutto City Council on July 20. The seven board members replaced the seven members of the Type A board at the same meeting.

The city set up the Type B option in July to have the ability to court a larger variety of businesses to Hutto. It is expected the Hutto City Council will ask voters in November to approve moving the half-cent sales tax designated to the Type A fund to the Type B fund. The move would not be an increase in taxes, it would just change the designation of funds.

On July 24, the board took action to limit the duties of Chase, telling him he would not be allowed to engage in any activities on behalf of the Economic Development Corporation.

Chase was selected to lead the Hutto Economic Development Corporation in August 2015.

Chase came to Hutto from Kansas, where he was president of the Wichita Economic Development Coalition. He previously served as president and CEO of the Wichita Falls, Texas Chamber of Commerce & Industry from 2001-13.
SHARE THIS STORY