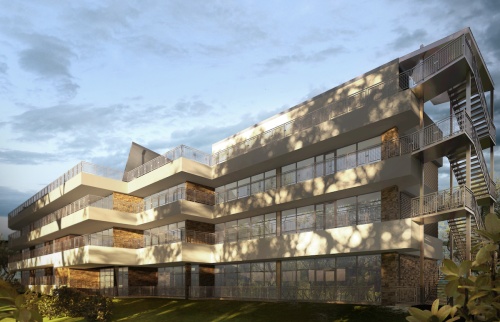 Four Eleven is under construction in downtown Round Rock.[/caption]

A new office building and restaurant in downtown Round Rock will bring together the area's history with new modern designs, local developer Nelson Nagle said.

Four Eleven will be 29,000-square-foot office building located on South Harris Street. Urban Eat. Drink. will be a new American fusion restaurant at 110 S. Harris St., in the former location of Round Rock Cafe and just in front of the new office building. Both projects are under construction.

Nagle said the construction of Urban Eat. Drink. will preserve and update the building's history.

"It’s going to be the old meets new," Nagle said. "We want the cool urban feel and we want to celebrate the history."

Nagle said that during building renovations he found an engraving under a floorboard. The engraving shows the initials and age of a nine-year-old child as well as a 1911 date. Nagle said he believes the property itself predates 1900.

Nagle said the restaurant will open in February.

Four Eleven will help drive a lunch crowd to Urban Eat. Drink., Nagle said. The new office building will be four stories, making it the highest observation point in downtown Round Rock, and will overlook Lake Creek.

Nagle said the architect designed the building to follow Lake Creek's shoreline to take advantage of the view. The building is supported by 78 piers that measure 14 to 20 feet long and extend deep into bedrock, he said.

"It's not your simple rectangle [building]," he said.

The building will also provide easy viewing of the I-35 overpass of the train tracks and McNeil Road. Nagle said the building's observation deck will provide a premier viewing spot for the bats that fly out of the overpass in the evening.

Nagle said the building will be Class A office space. He said Round Rock has limited space and the new building will help fill the need.