On key issues, House Republicans banded together, forwarding legislation on maternal mortality, abortion reporting and mail-in ballot fraud to the governor for signing. However, they divided on issues of property tax reform and school finance.


Community Impact Newspaper and The Texas Tribune have established a partnership to share summaries of new laws passed by the Texas Legislature that took effect September 1. Here is a look at some of those new laws.

House Bill 1774, which went into effect Sept. 1, will discourage property owners from suing insurers over weather-related claims. Supporters want to crack down on what they characterize as an increase in frivolous lawsuits. But trial lawyers and consumer groups say legal action is often warranted and correlates with insurers denying claims.

A statewide texting-while-driving ban went into effect Sept. 1. The law includes a provision to pre-empt local ordinances that govern a driver’s ability to “read, write, or send an electronic message."

As of September, Texas school districts in the market for new school buses must ensure they have shoulder-to-lap seat belts for all riders. This three-point seat belt requirement is mandated by a new law that is intended to improve safety for riders.

Beginning Sept. 1 a new law has given financial institutions in Texas greater authority to stop transactions that they suspect are aimed at defrauding elderly or disabled clients.

A new law requires Texas' free-standing emergency rooms to more clearly communicate what health insurance networks they are in, if any.

A new measure, known as David’s law, aims to confront cyberbullying from multiple angles. It changes the state's education code, mandating that school districts implement cyberbullying reporting, prevention and mediation programs. It allows victims younger than age 18 to seek injunctions and restraining orders in court, and it criminalizes online harassment if it can be proven that a bully intended for a victim to hurt himself or herself.

A new law requires craft brewers who produce more than 225,000 barrels a year to pay a distributor to deliver their beer—even if the destination is inside their own facility. 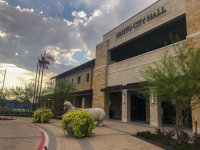 Hutto City Council members are looking to the federal economic stimulus legislation signed March 27 to see whether and how it can help the 48 city workers laid off last week.

Closures include the lake, fishing piers, pavilion, restrooms and trails around the lake and park.

Hutto ISD has extended its school closure through April 13, per a March 27 district announcement.