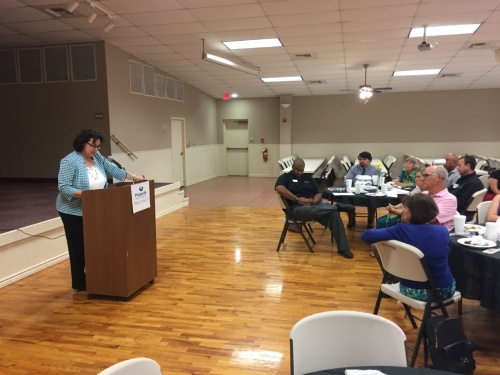 State Rep. Celia Israel, D-Austin, took a break from the special session at the state Capitol to visit the monthly Pflugerville Chamber of Commerce luncheon Tuesday.

Israel, who represents District 50, which includes a section of Pflugerville, likens her district boundary outline on a map to a bad toupee. Also bad, she said, is a special session with nothing good for Texans. What follows are some thoughts she shared at Tuesday’s forum:


Community leaders, including Pflugerville ISD board of trustees President Vernagene Mott and Pflugerville Police Chief Jessica Robledo, praised Israel for speaking up for the residents of her district.

“I love my job,” Israel said. “Representing you in the Legislature is an honor of my lifetime. If Texas needs me, I’m there in a heartbeat. The 20 or so items the governor laid out are not emergency items. [It's] all politics, and that makes me sad for Texas. It also riles me up and makes me want to work harder for Texas.”