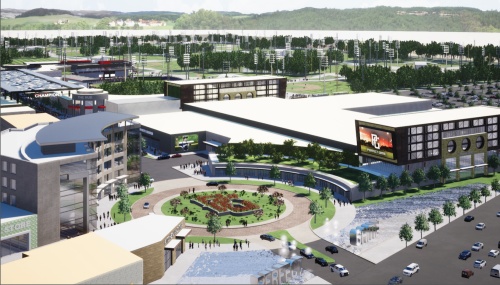 Plans are in motion for Hutto’s first indoor sports and event center. The 300,000-square-foot arena will seat 13,000 people and is planned as part of a mixed-use complex with office space, commercial, residential and retail components.

The site will include 24 turf baseball fields, 10 of which the city will develop for public use, according to an April 18 presentation to Hutto City Council. Multipurpose sports fields and other recreational opportunities are in the works as well.

After a national search for the organization’s headquarters, Perfect Game selected Hutto.

“Out of 48 states and 2,800 communities, we came out on top,” City Manager Odis Jones told Community Impact Newspaper. “This is a big deal for not only Hutto but for the region and the state.”

The project is expected to pump $200 million annually into the local community. The current economic generation of Hutto today is around $30 million, Jones said.

“Perfect Game is excited to name Hutto as our national headquarters,” Perfect Game founder Jerry Ford said in an April 18 release. “We are especially impressed by the people here and we look forward to a long successful relationship while we work closely with the community.”

The $800 million private investment makes this project the largest economic development deal in the history of Hutto, according to the release. It is a partnership between the city of Hutto, Perfect Game, developer Wolverine Interests LLC, Sports Facility Advisory and Sports Facilities Management.

Perfect Game tournaments are expected to generate demand for more than 150,000 hotel room nights for the region, Jones said.

Jones said the development is planned for Hwy. 79 and CR 132, adjacent to Fritz Park.

The opening tournament is expected to be held no later than Memorial Day 2021, according to the release. All fields, sports amenities and the hotel and events center are anticipated to be complete by the end of May 2021 as well.