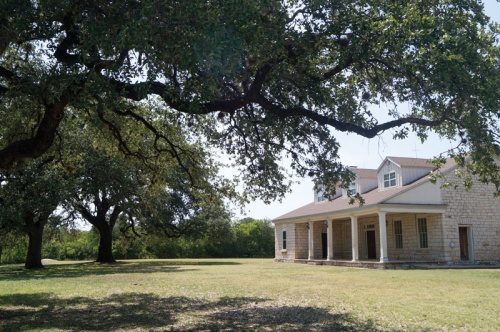 The city of Round Rock has identified a piece of city-owned property along Brushy Creek known as the Heritage tract as a potential location for a performing arts center. An historic building on the property could be converted into an art gallery, according to Next Act Arts and Entertainment.

Residents in a growing city may point to indicators such as roadwork or buildings as evidence of development, but there is another—less visible—sign of growth: quality of life. For Scot Wilkinson, Round Rock’s executive director of arts and culture, the arts and entertainment are a major contributor to the quality of life in the city.

“I would say our community would be very boring without the arts; it really adds a quality-of-life segment,” Wilkinson said. “We have beautiful parks; we have good businesses; we have good places to eat; but we also have good arts groups—that adds value to our community.”

Over the past few decades, the arts have found a foothold in Round Rock, and advocates are working to help it continue to evolve in the growing city.

“Round Rock is growing, but so are the arts,” said Yolanda Sanchez, founder of Ballet Folklorico, a dance group which celebrates Mexican heritage.

In early July, Southern Methodist University’s National Center for Arts Research named the Round Rock-Austin metropolitan area the 18th most vibrant art community in the country. Local art supporters said Round Rock’s contribution to that vibrancy has been the result of decades of work, with more yet to come.

In 1973 the Sam Bass Theatre was established, and in 1981 it found its own performance space in a repurposed Union Pacific Corp. depot building. Dale Ricklefs, president of the Round Rock Area Arts Council, remembers helping to paint the old railroad terminal for its new life as an arts space.

“That is my first recollection of what I would consider the public arts in Round Rock,” Ricklefs said.

“It has evolved tremendously,” Sanchez said. “I would say more than 100 percent growth.”

In 2007, Round Rock got its first professional theatre group, the Penfold Theatre Company.

“It was at a time when there was a lot going in the city of Round Rock—they were working on their downtown master plan; the first arts endowment had been established; the professional symphony had moved into town,” said Ryan Crowder, one of Penfold’s founders and producing artistic director. “That said to us that this was a community that was growing and of a size that it wanted to have its own art community.”

In 2012 the city hired Wilkinson as its first director for the arts and culture. Wilkinson said he worked closely with the Round Rock Area Arts Council, known as Round Rock Arts, to create a strategic plan to develop the next phase of arts and entertainment in Round Rock.

Currently arts and entertainment events take place 45 of the 52 weeks in each year, Wilkinson said, and the scale of those events continues to evolve.

In April the Texas Society of Sculptors held its annual SculptFest event in Round Rock. Wilkinson said over 70 artists were featured at the three-day event, which brought more than 10,000 people to the city. The same weekend marked the premier of Round Rock’s Allan Houser exhibit, which features $3.6 million worth of the renowned sculptor’s work. It is the first exhibit of Houser’s work in Texas.

While organizations and events are growing in both quantity and size in Round Rock, local artists say they are missing something crucial—a home.

“The biggest need for us is a place to perform that is actually equipped for the kinds of performances that we think our audiences deserve,” Crowder said. Penfold currently holds two of its four annual performances in Austin due to a lack of local venue space. “Round Rock is an honest-to-goodness city, and it has a lot of really nice assets to give to the community and we’d like our arts to be able to match that level of quality, and right now we just don’t have the tools to do that.”

Currently there are eight performance spaces available to groups in Round Rock that are not the school district buildings. Four of those spaces are outdoors and two are churches. Ricklefs said those spaces can provide hurdles such as the students’ performance schedules with the district facilities or weather with the outdoor facilities.

The city has identified a piece of property off of Heritage Center Circle, south of Hwy. 79, that could be used as the future site of a performing arts center, Wilkinson said. The next step is to determine what that center might look like and how much it could cost. The 2015 Corgan study recommended Round Rock allocate between $46 million and $49.8 million in total project cost for a 70,800-square-foot facility.

Currently the city is having an economic and feasibility study completed by a firm that specializes in business planning for cultural facilities to determine what exactly the performing arts facility would look like, Wilkinson said. The study would focus on financial and market feasibility, demand, revenue strategies, program development economic impact, operational plans and strategic master plans. Wilkinson said he hopes to see the study conducted early this fall.

Once the study is completed and a clearer picture of Round Rock’s performing arts center is in place, Wilkinson said the city and Next Act will be able move forward on exploring funding options.

“I believe that we have enough arts groups in the city of Round Rock right now to fill that facility 100 percent,” Wilkinson said. “Every story has a beginning, middle and an end, and I think we’re right in the middle of telling this story of what’s wonderful about Round Rock.”