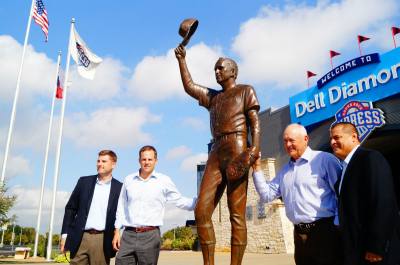 A copper statue of Nolan Ryan was unveiled at the Dell Diamond.

The Round Rock Express has finalized their promotional calendar for the 2017 season. Included in the mix of events are $1 hot dog and soda nights, discount beer nights, a summer concert series and specialty giveaways.

The season starts on April 6 with a game against the Nashville Sounds. As part of the inaugural game, the team will be giving away special edition magnets and hosting fireworks following the ending of the game.

After select games from April until August, the team will host concerts from The Spazmatics and Bob Schneider. Individual games will also have themes like 90s Night, Star Wars Night, Cancer Awareness Night and Superhero Night.

Giveaways throughout the season will include baseball cards, grilling aprons, team photos, Nolan Ryan bobbleheads among other prizes.