Statewide, a seasonal total of 679 confirmed influenza cases have been reported as of Jan. 30. Comparatively, 34,717 seasonal flu cases had been reported statewide as of Feb. 1, 2020. (Courtesy Adobe Stock)

While COVID-19 cases continually increase in Travis and Williamson counties, the Austin-metro region is reporting significantly lower cases of influenza compared to seasons prior.

Flu activity levels are classified as minimal in Travis County as of Jan. 20, according to the Austin Public Health influenza surveillance report. As of Jan. 30, Austin Public Health reported one adult influenza-associated death has been reported in Travis County in the season to date. As of Jan. 30, no influenza-associated pediatric deaths or affiliated outbreaks have been reported during the 2020-21 season.

Area health experts have attributed minimal influenza case numbers to increased numbers of vaccinated residents along with preventative health measures in place due to COVID-19.

"What we've learned is that all the measures we're taking to prevent the coronavirus helps prevent other respiratory illnesses," said Dr. Patricia Lopez-Gutierrez, a family medicine physician at Baylor Scott & White Clinic in Round Rock. "Things like social distancing; quarantining when sick; quarantining within the same household; and, of course, avoiding crowded places all help." 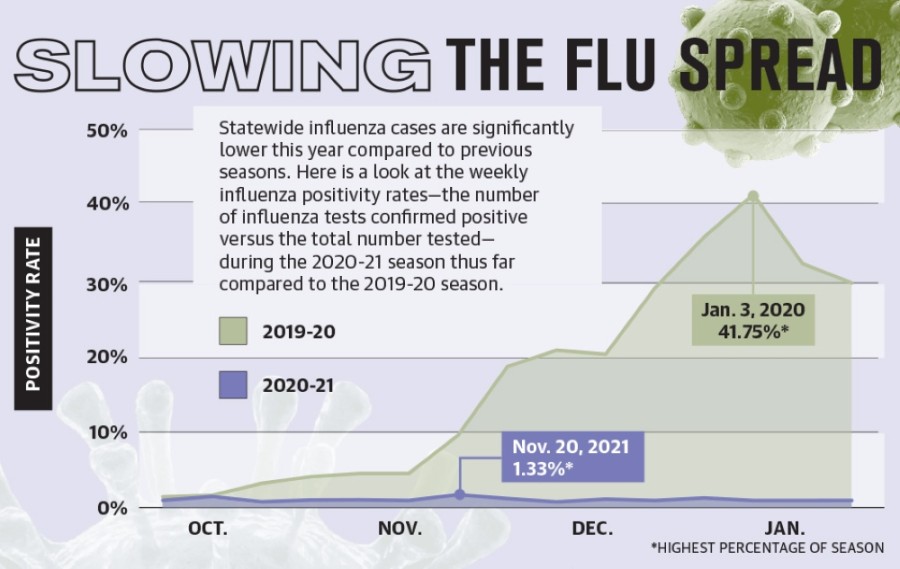 While case counts remain minimal in the region, safety measures used against COVID-19 apply to the flu. Washing hands, staying at home while sick and disinfection practices all help minimize the spread, Lopez-Gutierrez said.

"We learned a lot from [COVID-19] how to prevent getting sick," she said. "I hope a lot of the things that we've learned, we still keep in mind for the future."