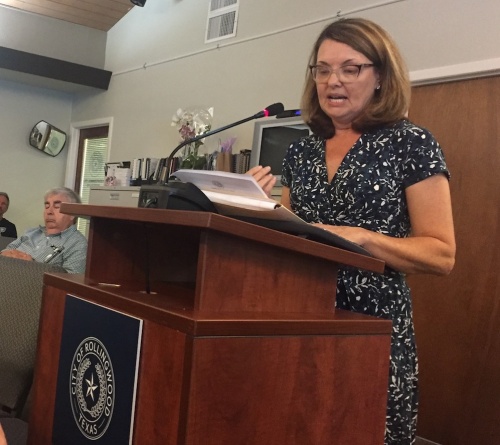 Marina Breeland speaks at a public hearing on the potential agreement between Rollingwood and Rollingwood Park Trust Inc. during the July 17 City Council meeting.

The dominant feeling from Rollingwood residents regarding Hatley Park is that it is the heart of the city. The question residents do not necessarily agree on and that is now before city officials is what should be done about the park’s overall maintenance and operation.

A partnership between the city of Rollingwood and nonprofit corporation Rollingwood Park Trust Inc. to operate and improve Hatley Park is still under consideration by city officials, and a July 17 public hearing on the matter spoke volumes about how important the park is to Rollingwood residents.

During last month's June 19 regular meeting, council heard a proposal from Rollingwood Park Trust as well as nonprofit corporations Western Hills Girls Softball Program Inc. and Western Hills Little League Inc., with the stated purposes being to provide youth sports activities and to make improvements within the park and its five athletic fields.

Following the June 19 proposal, council voted to authorize Mayor Michael Dyson to work with Rollingwood Park Trust on a nonbinding memorandum of understanding that would involve a framework of terms to be considered and developed by and in partnership with other entities, including the Rollingwood Park Commission.

Under the city’s terms, that would occur prior to authorizing City Administrator Amber Lewis to negotiate a contract with Rollingwood Park Trust.

Rollingwood officials held a public hearing on the potential agreement during the July 17 City Council meeting at which several residents spoke in varying tones on the proposed partnership.

Resident Thom Farrell said for the most part he is on board with the proposal, and Marina Breeland, who serves on the Rollingwood Park Commission, said the city needs to know how to fund what it wants for the park moving forward.

A substantial portion of the Rollingwood Community Development Corp.’s funds—$80,000 according to the city’s 2018-19 adopted budget—go toward maintaining and operating the park, with several thousand more going toward trail improvement, park drainage and turf for an adult exercise area.

Breeland said other sources of revenue need to be explored, as the RCDC faces augmenting expenses from other facets within its financial purview.

“We’re not being good stewards of the park if we don’t pursue this as a source,” Breeland said, referring to the potential agreement with Rollingwood Park Trust.

But several other residents spoke during the public hearing and levied concerns ranging from fears of relinquishing city control of Hatley Park to outside interests to what some described as its needless commercialization through pursuits, such as signage along the ball field fences and a cafe in the center of the park.

The proposal discussed June 19 states Rollingwood Park Trust would invest more than $100,000 over 12-36 months of the new agreement for capital repairs, replacements and improvements within the park.

Lewis said July 18 the next steps for the city involve continuing work with Rollingwood Park Trust to develop the nonbinding memorandum of understanding. She added there will be more opportunities for public input at the Rollingwood Park Commission meeting and the City Council meeting in August, and that input will be considered as officials and staff develop the memorandum.
SHARE THIS STORY