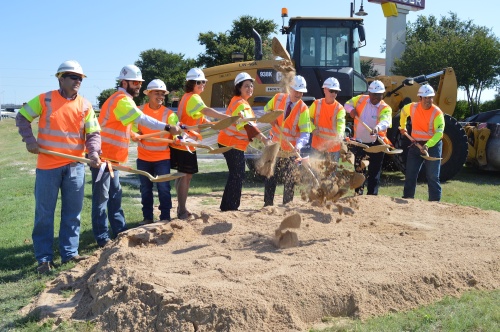 State and local officials break ground July 24 on the $32.5 million Parmer Lane improvements project, signifying the beginning of construction that is expected to finish in mid-2021.

Motorists can expect to see delays at I-35 and Parmer Lane this fall as the state begins work on a complex diverging diamond road pattern designed to alleviate traffic both on the interstate itself and its adjacent roadways.

State and local officials broke ground July 24 on the $32.5 million project, signifying the beginning of construction, which is expected to finish in mid-2021.

“There are a lot of major employers around here,” state Rep. Celia Israel, D-Austin, said. “Austin is awesome. Our region is awesome. Transportation is the bane of our existence, though. It is harming our future potential to do good things.”

The Parmer improvements project, funded by the Texas Department of Transportation, will construct a diverging diamond interchange. The new traffic pattern will direct vehicles to cross over to the opposite side of the road to facilitate more efficient turning movements, according to TxDOT documents.

“Parmer Lane is a critical east-west route for our region. We know there is a lot of travel on this corridor right now,” said Ashby Johnson, executive director of the Capital Area Metropolitan Planning Organization.

As previously reported by Community Impact Newspaper, the project additionally includes adding turn lanes at the intersection of Parmer and North Lamar Boulevard.

“Unfortunately the improvements have not kept pace with the growth of the residents and the population, resulting in ever-increasing congestion that we can see on the roadway on a daily basis,” TxDOT Austin District Engineer Tucker Ferguson said.

Contracts for the project have been awarded, and motorists can expect to see barriers put up near Parmer and I-35 in the coming weeks, TxDOT officials told Community Impact Newspaper. Lane closures will begin shortly after the barriers are put up and are expected to begin before this fall.

Construction will wrap up on the diverging diamond project by mid-2021, according to TxDOT's projected timeline for the improvements.