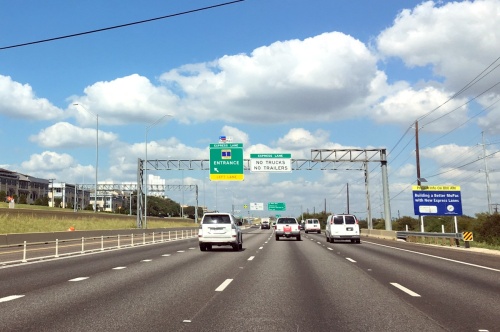 The speed limit in the MoPac express lanes has been increased to 70 mph.

Drivers in the MoPac express lanes, which run between Parmer Lane and Cesar Chavez Street in Austin, will soon be able to enjoy faster speeds than those traveling in the nontolled lanes.

“I’m all in favor of what you’re doing,” board member David Singleton said. “Our customers’ expectation is when they’re paying to use the lane they would like to see it keep moving.”

Justin Word, the agency’s director of engineering, said when a toll lane opens, the speed limit is generally set at the same level as the adjacent nontolled lanes. After the lanes have been open for a while—the full project opened in October 2017—the agency can look into changing the speed limit.

Word said the Mobility Authority conducted a speed study in December to determine what speed a reasonable driver wants to drive compared to the posted speed limit. Other factors the agency considered when making a recommendation to the board included looking at crash data.

“Accidents were really more prevalent near the ramps and in weaving areas related in the general-purpose lanes and didn’t see any clear trends that indicated issues with speed-related problems in the express lane,” Word said.

Although the motion to change the speed limit was approved, board vice chairperson Nikelle Meade was the lone opponent. She said she supports the increase in the maximum speed but voted no because she is against setting a minimum speed.

“The risk is that it gives drivers a license to go that speed limit,” she said.

Word said a minimum speed is not required but is typically for cases in which slow-moving vehicles impede normal traffic flow and lead to more passing.

“We unfortunately have seen illegal unsafe shoulder passing maneuvers on the facilities, so there is some pent-up demand to get around folks going extremely slow,” he said.

Board members Mike Doss and Singleton said they would like to see the Mobility Authority conduct more analysis on how speed relates to the price of using the toll lane. Because the lane is variably priced, it fluctuates based on demand.

“The comment that I hear the most is the frustration of ‘Hey, I jumped in the lane, and it’s not moving,’ and I think it’s because we’re artificially constraining that dynamic pricing,” Singleton said. “Setting the speed limit without looking at that is a little naive, so I’d like us to look at that as well. When you artificially cap something or limit something, you’re taking away what the dynamic pricing can do.”

Doss added he would like the agency to look into adding electronic signs to tell drivers the time it would take to use the toll lane versus the nontolled lanes.
SHARE THIS STORY