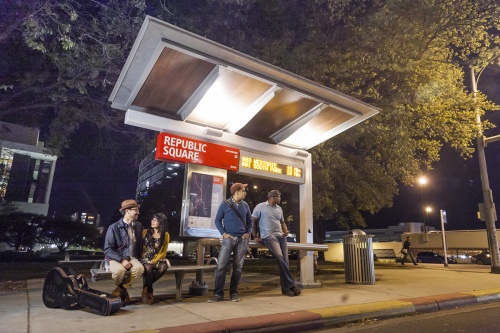 Capital Metro is planning to start construction in 2018 on eight pairs of new bus stations for its two MetroRapid routes.

The transit agency’s board of directors approved an agreement Dec. 18 with the Texas Department of Transportation to allow for the construction, maintenance and operation of four station pairs. The vote followed a similar action earlier in 2017 with the city of Austin for the other four station pairs.

Before construction could begin, Capital Metro needs to go through permitting with the city and bid the project for construction, which should take about three months, said Ken Cartwright, the agency’s vice president of capital construction and engineering.

Two pairs of stations would be built along Route 803, which runs along Burnet Road and South Lamar Boulevard. Five pairs would be on Route 801, which runs on North Lamar Boulevard and South Congress Avenue. The eighth station pair would be on the section that both routes share. New locations include being near key businesses, such as Wheatsville Food Co-Op, the Broken Spoke and several taquerias.

“We’re trying to fill in the gaps of the original locations because of the added development,” Cartwright said.

The infill stations would also help reduce the distance between stations, sometimes from as much as one mile down to a half-mile.

Cartwright said construction would wrap up in late 2018 and staff members are still deciding on when to open the stations to service.