Autonomous shuttles will be driving in downtown Austin this fall 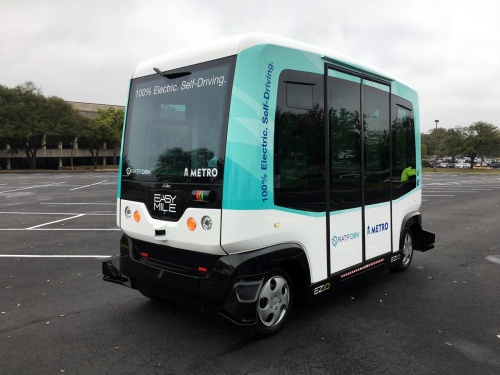 It may not be the ’Dillo shuttle many Austinites remember, but a new downtown circulator operated by autonomous vehicles will launch this fall in Austin.

The autonomous, or self-driving, shuttles are part of a new technology-infused approach to transit that Capital Metro has been exploring in the past couple of years.

“We just really want to start connecting the community closer together through technology and the services Capital Metro provides,” President and CEO Randy Clarke said.

Capital Metro will operate the pilot shuttle program, which has yet to be named, for 12 months, and rides will be free during that period. The agency will also be seeking bids from autonomous vehicle manufacturers to lease six vehicles for the program.

The 15-passenger shuttles, which will be accessible under the Americans with Disabilities Act requirements, will travel throughout downtown every 5 to 7 minutes on a route that has not yet been determined. However, the shuttle will serve major destinations, such as Austin City Hall, the new Central Library, Republic Square and the downtown MetroRail station, according to Capital Metro.

“We think we could connect that whole east-west downtown connectivity piece that we know could be a little better than today,” Clarke said.

Even though the shuttles will operate autonomously, an operator will be on board to assist customers and be on hand for any safety or security issues.

Testing of the autonomous system will begin in July and take 60 days. The first phase will involve testing the technology without passengers on board and include assessing the battery life, how the vehicles dock to let passengers on and off, and safety concerns. The second phase would involve passengers on board, officials said.

“This is not only a transportation project, but this is a tech project as well,” said Elaine Timbes, deputy chief operating officer of Capital Metro. “While it’s a proven tech, we still have some proving to do in the city of Austin.”

In 2017, Capital Metro and RATP Dev, one of its service providers, hosted a demonstration of autonomous vehicles at The University of Texas during the South by Southwest Conferences and Festivals. Autonomous shuttles are also a part of other innovative mobility solutions the agency will explore under its Connections 2025 service plan adopted last year.

“[Autonomous vehicles are] kind of in this migration period right now between fully autonomous in the future and the vehicle kind of learning,” Clarke said. “We think it’s going to be safe and efficient, and it’s spread out from a capacity and frequency point of view.”
SHARE THIS STORY