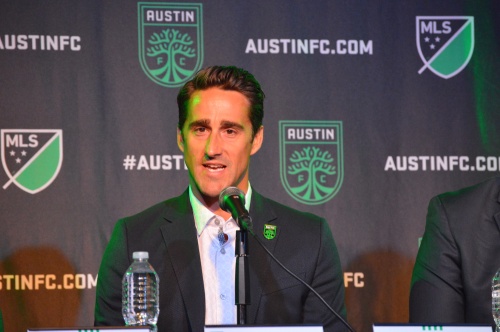 Josh Wolff was announced as Austin FC's first head coach on July 23. Wolff most recently worked with the USMNT.

Approximately two years ahead of its inaugural game, Austin FC already has its coach.

"There are a lot of things that attracted me about Austin. ... That is the only job I wanted," Wolff said July 23. "Going forward it is about ... building a culture."

Wolff, 42, most recently served as an assistant for the U.S. men's national soccer team, a post he held for a year. Previously, the MLS veteran has worked as an assistant coach for D.C. United and Columbus Crew. Wolff played in the MLS for a total of 14 seasons, amassing 80 goals and 49 assists in 267 regular season games. The new Austin FC coach also made 52 appearances for the U.S. men's national team, scoring nine times.

During his time with the coaching staff at Columbus, Wolff worked under Anthony Precourt, president and CEO of Austin FC.

"We obviously have a great level of comfort with Josh," Precourt said at the announcement. "He is a rising star in the MLS. When there’s an opportunity to hire a great talent, we have to jump on it."

Team officials said Wolff will get to work with Austin FC soon, and Wolff will retain his role with the men's national team until the end of the year. Austin FC's inaugural game is set to be held in March 2021, but Wolff and team executives say they have a lot of work to do building up the team prior to the first kickoff at the McKalla Place stadium.

Precourt said the team is looking to bring in a general manager and sporting director before the end of the year, and that position would work with Wolff to sign players to build out the roster, develop the team's academy system and recruit players abroad.