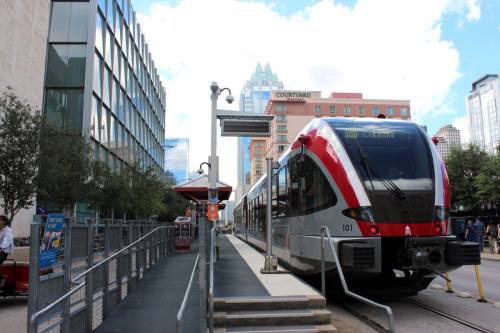 Capital Metro named Randy Clarke on Jan. 12 the lone finalist to lead the transit agency as its new president and CEO.

Clarke, 40, is the vice president of operations and member services at the American Public Transportation Association. Prior to that, he worked for seven years in various positions with the Massachusetts Bay Transportation Authority in Boston.

“The board broadly speaking was excited about Randy’s experience at the transit authority in Boston, a very large complicated agency, very vibrant,” Capital Metro board Chairman Wade Cooper said. “He had tremendous operational, capital project experience there and he went to APTA where he has the chance to know transit professionals from all over the country, possibly all over the world, and really has a good grasp on what’s going on in the industry, the best practices.”

The board also authorized search firm Krauthamer & Associates Inc.—which facilitated the search—to negotiate a contract for Clarke. Cooper said the board communicated input on his salary but did not disclose a figure. Former President/CEO Linda Watson, who retired Dec. 31, earned $358,450 plus a prorated 4 percent bonus of $5,450 for a total of $363,900.

An official start date has not been set, but the board is scheduled to vote on Clarke’s contract at its regular meeting Jan. 29.

The board deliberated in closed session for two hours Jan. 12 after discussing the decision in closed session Jan. 9 following a public forum the previous night. However, the vote to name Clarke was not unanimous as board member Delia Garza—also the Austin City Council member for District 2—abstained from voting.

“We had an impressive slate of candidates, but for me, in this moment where women are turning the tide on generations of suppression and discrimination, I preferred the option that would have given a well-qualified woman the opportunity to lead,” she said in a statement sent to media. “That being said, I believe Mr. Clarke will do great things for this agency, and I look forward to working with him.”

Cooper said Clarke will bring a lot of energy to the role and could also aid the agency in moving its rail operations forward because of his experience working with federal transit authorities. Capital Metro is in the midst of expanding its MetroRail line with double tracking and building a permanent and larger downtown station to increase frequency. It is also working to implement Positive Train Control.

“Federal funding has been an important part to improving our system for the last several years,” Cooper said. “… The [Federal Railroad Administration] is going to be looking very carefully at the progress we’re making on installing Positive Train Control, and he knows those folks.”

Prior to the Jan. 8 public forum, Clarke spoke to the media about the biggest challenge he sees for Capital Metro: Austin’s growth.

“Austin is changing and changing dramatically, and the question is, ‘What does Austin what to be in the future?’” he said. “And that vision needs to come together because mobility is the underlying component that brings it all together. Mobility touches economic opportunity, it helps deal with social inequality issues, affordable housing, zoning, land use. At the end of the day, transit is changing dramatically, and Austin’s on the cusp of doing something really innovative and amazing because of the forecasted growth.”

Clarke said he currently rides transit in the Washington, D.C. area and plans to also ride transit while in Austin. While in Austin interviewing for the job, he said he spent a few hours riding buses from the Austin-Bergstrom International Airport to The Arboretum in Northwest Austin.