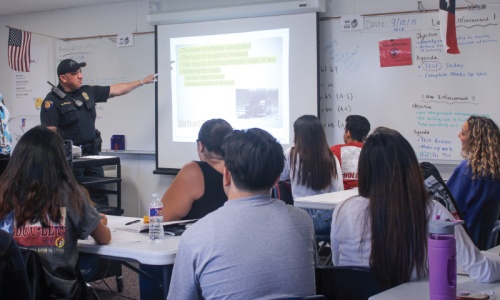 Round Rock Police Officer Raul Morales serves as a school resource officer in Round Rock ISD. RRISD is now exploring options for a district-run police department.

Throughout Northwest Austin’s three school districts—Austin, Pflugerville and Round Rock ISDs—administrators are evaluating the safety concerns of students, parents and staff.

Whether it be investing millions of dollars of bond funds into school infrastructure upgrades aimed at improving safety, hiring new personnel or establishing a police force, each district has a different approach toward spending taxpayer dollars and trying to keep students safe.

“This is not specific to Pflugerville,” she said. “It is the society we live in at this point. With social media, we deal with a lot more safety concerns.”

Through AISD’s $1.05 billion bond approved in 2017, 17 campuses are being modernized and others are receiving updates to safety equipment such as security cameras and intercoms.

He said the district designs campuses with “an open mind,” knowing that future advances in technology could lead to modifications. The team looks at how facility design can prevent emergency situations and improve safety for students and staff, he said.

“We look at not just evil things like an active shooter, but also how can we protect students so they feel secure during the [average] school day,” Cervi said. “How we can mitigate bullying by changing the interior architecture so you don’t have blind spots or secluded areas where kids can get cornered.”

Cervi said one of the key components of many modernization projects is creating single-entry points with security vestibules on campuses. During the school day, doors are locked, requiring all visitors or late students to enter through the main vestibule. Visitors are required to check in with staff prior to gaining access to the rest of the campus.

Another area of focus is improving line of sight and reducing the number of blind corners in schools, he said.

“People probably think that is just the opposite of what you’d want—a wide area where you could see everything—but it actually helps,” Cervi said. “It gives you that field of view to see if there is that issue coming your direction so you can react accordingly.”

Separate from the campuses receiving renovations that improve safety, Cervi said about $26.6 million of the bond specifically funds district security.

Most of PfISD’s major security improvements were implemented following the passage of the district’s 2014 bond, which allocated $4.7 million for safety upgrades, including the addition of secure vestibules, Health and Safety Director Denise Kablaitis said.

Since being hired as director of health and safety in 2017, Kablaitis said she has standardized the district’s safety drill procedures and also involved the district police department in lockdown drills.

“This gives an added presence and the officers can answer questions that staff have if this were a real situation,” she said. “We practice it as real as it can be but keep the mindset of a drill.”

PfISD also implemented a new alert system, Anonymous Alerts, which allows students and parents to report threats and safety concerns to campus administrators anonymously online or through a smartphone app, she said.

Kablaitis is also a registered nurse and the former director of health and safety at Hutto ISD and oversees the district’s counselors and social workers, who also play a role in safety, she said.

“If there is an illness or breakdown a student is presenting us with, our mental health officers can step in and support them and the family in their immediate needs, and then the social workers step in to help them in their long-term needs,” she said. “We can make sure they’re continuing to get services and definitely it’s going to help protect our campuses.”

RRISD is also proposing to make safety and security changes if its $508.4 million bond is passed in November.

The bond proposal includes $29.8 million for items such as intercoms at school entrances in addition to the secure vestibules that are already in place. Visitors would have to wait outside before being paged in, a move that could alleviate concerns from parents such as Kshitij Sharma, who moved to Northwest Austin from Massachusetts. He said he noticed it is easier to get into his child’s new school.

“I would feel safer if there was more of a barrier getting into the building or a security guard,” Sharma said.

Before the board of trustees approved placing the bond on the ballot, the district was already making changes to personnel in charge of safety.

In 2016, Mario De La Rosa joined RRISD as its first director of safety and security. With a background in law enforcement both in the U.S. and abroad, De La Rosa said his first order of business was to have an independent safety audit conducted on all of the school’s campuses and facilities. The audit evaluated campus design, evacuation procedures, disaster plans, protection from environmental hazards and other concerns.

“I knew [the audit] was going to be the foundation of many of our changes to come, so we were very fortunate that the board approved the expense [for the audit],” he said.

The audit, conducted by the Harris County Department of Education Center for Safe and Secure Schools, evaluated RRISD’s preparation for events such as environmental and weather hazards, fires and active shooters.

“That allowed us to look at best practices and gave us the foundation to make all the other changes,” De La Rosa said.

One of the recommendations of the audit, he said, was creating the school district’s own police force. In June, RRISD announced it formed an exploratory task force composed of teachers, students, parents, community members, law-enforcement officials and former public officials to develop a proposal for the board of trustees to review by early December, RRISD’s Director of Communications Jenny LaCoste-Caputo said.

“Their charge is learning about the issue, understanding where we are [and] exploring our options,” she said.

“The police force will be an added cost because there’s some initial costs such as uniforms and vehicles, but it’s not from scratch,” she said. “It’s not Williamson County Sheriff’s Office paying the deputies’ salaries; we’re already absorbing that staff cost.”

LaCoste-Caputo said department leaders that contract out employees to serve as school resource officers said their forces are stretched thin, and they will have to pull officers away by 2021.

“That gave us plenty of time to transition to something else, and [Round Rock Police Department] Chief [Alan] Banks committed to helping us through that transition,” she said.

For more local education news, please see all of the local stories from our Education Focus edition.