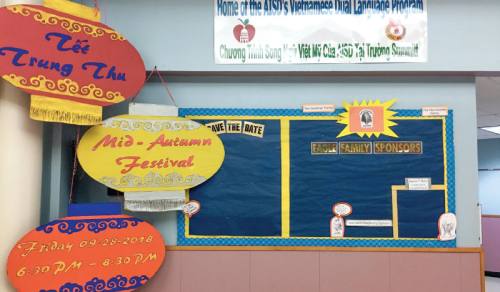 Between rows of portables at Summitt Elementary School in Northwest Austin is a hidden oasis of a tiny pond filled with orange fish, round tables shaded by grass-covered umbrellas and benches surrounded by flowers.

This outdoor patio serves as a meeting space for parents whose children are in the Vietnamese dual-language program at the school.

Seven North Austin AISD schools offer a one-way dual-language program in Spanish, and Summitt offers both a one-way and two-way program in Vietnamese.

“The added benefit of dual language is that it also recognizes and maintains and honors the first language as well,” said David Kauffman, director of AISD’s Multilingual Education Department.

AISD’s goal in dual-language classrooms is to achieve biliteracy, bilingualism and biculturalism.

“We’re just trying to offer language opportunities for as many students as we can,” Kauffman said.

Summitt’s Vietnamese dual-language program was the first of its kind in the U.S. when it began in 1981, said Thuy Nguyen, Summitt’s bilingual instruction coach who has been spearheading the program for over 20 years. The program was first housed at Walnut Creek Elementary School but was relocated in 2008 to Summitt when Walnut Creek faced overcrowding.

In the 2017-18 school year, Summitt had 842 students, of which 23.4 percent were Asian, according to the Texas Education Agency. Nguyen said the Vietnamese program has about 270 students, including native Vietnamese speakers and native English speakers.

Nguyen said interest in the program from families who are Vietnamese but speak only English is a result of a change in tide when Vietnamese families, including Nguyen’s, immigrated to the U.S. after the Vietnam War ended in 1975. She said the initial thought was just to learn English and assimilate instead of embracing their culture.

“But now after 40 years, they realize sooner or later their kids learn English anyway and now they still have parents and roots in Vietnam, and … most of the parents right now, they are young professionals; they wish they had learned Vietnamese and put their kids in the program in order to learn Vietnamese.”

When Nguyen came to AISD 20 years ago, she said the program was similar to English as a Second Language, in which non-English speakers are taught in only English in an effort to catch up.

This practice, Nguyen said, can lead to a student losing his or her native tongue and feeling a loss of identity.

Students learn social studies and math in Vietnamese, and English and science in English. Children may enter the program as early as kindergarten.

“The reason why we’re a successful program is the cultural aspect,” Nguyen said.

Sarah Orman’s two children, fourth-grader Sander and first-grader Lyla, are both in the two-way program. Last year, the family went to Vietnam along with others in the program.

“When we got back from Vietnam, there were about three days where my daughter wasn’t speaking English,” Orman said.

“There have been two times where a student came in not speaking hardly any English, and both times it was really sweet to see how the English-speaking kids would take them under their wing,” she said.

Sander also had a recent lesson in Mandarin, and Orman said he was able to quickly pick up on that language.

“Now they have a foundation for learning new languages,” she said.

For more local education news, please see all of the local stories from our Education Focus edition.