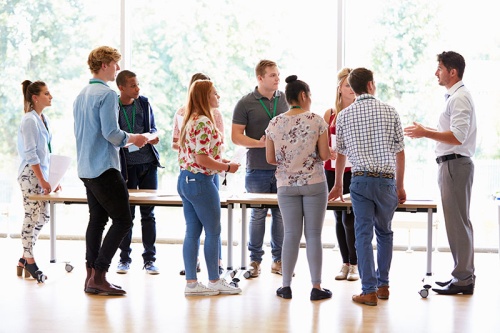 Many families in the Austin area say they could use more assistance as students who have intellectual or developmental disabilities graduate.

When William Mullican visited Tim’s Place, a restaurant in Albuquerque, New Mexico, run by a man with Down syndrome and his brother, he said it inspired him to use his food service industry experience to eventually open one of his own in the Austin area.

As a 21-year-old student with Down syndrome in Pflugerville ISD’s special education “Community Connects” program, William Mullican works part time a coffee shop in downtown Austin, H-E-B and Russo’s New York Pizzeria in Pflugerville. When he ages out of the program next year, his father, Bill Mullican, said he worries that even with Austin’s strong economy, finding and maintaining further employment will be challenging.

“As a parent, it’s a very scary sort of a transition because once they turn 22 and they’re out of the school district, you really do lose your support structure for everything you’ve had since they were born,” Bill Mullican said.

Some area families said the support systems necessary to help people with intellectual and developmental disabilities, or IDDs, find and maintain employment lag behind the city’s job growth. Allison Abramo, a program manager at The Arc of the Capital Area, a nonprofit that provides resources for people with IDDs, said the organization’s new Supported Employment Program seeks to address that issue.

“Although Austin is growing and has a lot of great opportunities it is also kind of struggling in this area because some of the [government] programs in Texas, such as our vocational rehabilitation services here, are not nearly as advanced as in other states,” Abramo said. “It can still be a huge barrier for people with disabilities to find agencies that are able to help them find employment.”

In the last 10 years Texas has ranked 49th or 50th in the U.S. in access to resources for individuals with IDDs, according to a national study from Cerebral Palsy United, an organization that analyzes U.S. Census Bureau employment and Medicaid data.


Preparing to enter the workforce

Northwest Austin’s three public school districts, Austin, Pflugerville and Round Rock ISDs all offer job training programs for students in special education based on the students’ level of interest and abilities.

The programs include resume writing, interview training and partnerships with area businesses to gain experience. Job coaches assist students with learning self-regulation and communication skills. Some families, however, struggle to help their children find jobs once they lose the school’s support network.

“The biggest need [from clients] that I’m seeing is not necessarily lack of training; it’s really being connected with job opportunities,” Abramo said.

Last year, when the daughter of Northwest Austin resident and single mother Kimberly Cates graduated from Round Rock ISD’s special education program at McNeil High School, most of her temporary job opportunities through the school district ended, except for a position she held as a hostess at Kerbey Lane Cafe. At the same time, Cates was in a bike accident and said she was unable to help her daughter, Haley, find transportation to work and needed her daughter’s help around the house.

“When I did need [outside support], it wasn’t there, and that was the most opportune time to have somebody come in and give those resources: when she was getting out of high school and I was stuck in bed,” Cates said.

Texas has some of the longest waitlists in the country for Home and Community Based Services, federally funded support programs for people with IDDs.

The Texas Health and Human Services Commission determines a person’s eligibility, and as of 2014 it had over 100,000 people on its waitlists, according to Cerebral Palsy United. Both Cates and William Mullican’s mother, Tammy, said their children have been on state waiting lists for over 10 years.

Now that Cates is back on her feet, she said she has had trouble finding her daughter a job or getting into classes at Austin Community College.

“I think it’s more of a community-based action that’s going on to make sure these kids are getting transitioned into the community more so than it is the school programs, because I haven’t experienced that much [help] outside of her graduating high school,” Cates said.

“With outside services, it’s all about consistency just like it is in a school,” he said. “No child wants to change teachers five or six times during the year. It’s about whether or not that class had a good counselor that follows up with them once they leave and doesn’t just kind of let them fall off the cliff but continues to support the way we did.”

During a transition period that can cause emotional turmoil, access to emotional support through therapy and job coaching can be especially important, said Cindy Spencer, a Northwest Austin-based behavioral therapist and licensed counselor. Many of her clients are looking to help their children manage the stress of transitioning out of high school and into work.

“A lot of individuals with disabilities, that structure and that routine, when that gets disrupted, it can really throw them off because they knew what to expect, they knew what was familiar and suddenly it’s not,” Spencer said. “For any of us those things are tough, but for someone with a disability, it has even more of an impact.”

Recently, Cates was able to find her daughter a job coach through The Arc.

“Depending on the level of their intellectual disability, [a job coach] is very crucial,” she said. “There were times I would have to go up [to Kerbey Lane] and make sure Haley stayed on task.”

One employer in downtown Austin, Empowered Coffee, seeks to exclusively employ people with disabilities. Co-founder Kimberly Davis said when the shop first opened in January, they received three times as many applications as they had spaces for and they continue to receive applications now, with people willing to travel to work.

As companies learn that hiring people with IDDs can benefit communities and businesses, many see potential for businesses to step up.

“People think that they don’t have time to train somebody like that or they don’t have the patience but yet they do, and when there’s resources out there and job coaches out there, it’s possible,” Cates said. “I don’t think we have enough messaging in the community.”

Since The Arc’s Supported Employment Program began in March, Abramo said she has seen significant interest, not only from job seekers with IDDs, but also from businesses wanting to learn more about employing them. In coordination with other agencies in the area, The Arc held an information session in April about compliance with the Americans with Disabilities Act and said representatives from over 70 businesses attended.

“This is a group of people that are highly motivated to work, and when they have a job they produce really high- quality work,” Abramo said. “When they have the correct training and the correct accommodations, they’re able to produce such amazing things.”

Abramo said The Arc has already been able to help several individuals find employment with Facebook Inc. at its downtown headquarters and at The Domain. She said she hopes The Arc’s services will help people get jobs where they can grow into their roles.

Tammy Mullican said she is looking forward to an event through her son’s program that is bringing together local business leaders from Apple Inc., IBM Corp., Facebook and others to develop a stronger collaboration with Pflugerville ISD’s special education community.

“I think [employees with IDDs] are of value, I think William is an asset to Russo’s Pizzeria. He has people that we don’t even know that go just to see him because he’s about probably one of their longest continuous employees since they moved in,” she said.

If companies of all sizes learn the benefits of hiring people with IDDs, Davis said it could create more collaboration.

“I think there is a lot of very cool employers in Austin that we could build partnerships with and do this whole thing together,” Davis said.
SHARE THIS STORY