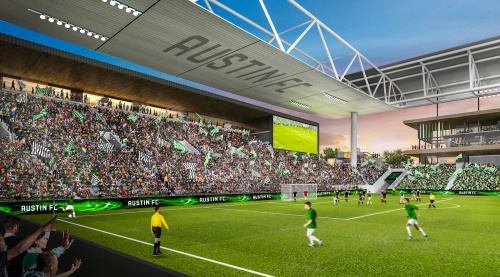 “We are elated to have such a talented and diverse group join Austin FC as charter members of our inaugural staff," he said in a statement.

As president of Austin FC, Andy Loughnane will be in charge of business side of the club, such as community and supporter engagement; ticketing; sponsorships; marketing and communications; digital and social platforms; advertising; merchandise; food and beverage services; stadium operations; and training facility operations.

Austin FC is operated by Precourt Sports Ventures, which just finalized its lease agreement in December with the city of Austin to build a $225 million stadium at 10414 McKalla Place in North Austin near The Domain.

Because Loughnane will be new to Austin, he said he plans to listen and learn to understand any questions the public may have to “hopefully earn trust and over time through good brand awareness, good operations, will build our relevancy and build strong relationships and brand affinity.”

Loughnane worked for the Crew since 2014 and helped the team achieve several milestones, including securing a naming rights partnership for MAPFRE Stadium, developing a broadcast distribution package and securing the largest annual partnership commitment in the team’s history.

“Andy’s long track record of success in the sports and entertainment industry and his instrumental leadership of Columbus Crew SC make him the ideal leader to serve as president of Austin FC,” Austin FC Chairman and CEO Anthony Precourt said in a statement. “He is a proven operator who will be crucial to achieving our goal of developing a proud, winning franchise in Austin. I look forward to continuing to work closely again with Andy as we embark on this great opportunity to build a Major League Soccer team in Austin.”

Hiring of other Austin FC roles, including the coach, general manager and players is still a ways out. Loughnane said those roles will be filled in 2020 through early 2021. The club ultimately will employ about 100 people, he said, and interested applicants may email [email protected] for employment opportunities.

Groundbreaking on the roughly 20,000-seat stadium is planned for this fall with an opening in spring 2021.
SHARE THIS STORY