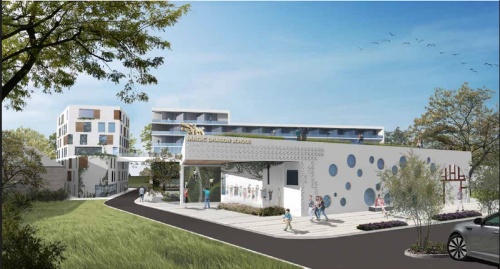 The Asian American Cultural Center has submitted a zoning change request so that it can accommodate a senior living facility on its premises.

Residents can provide input and learn about proposed changes to the Asian American Cultural Center at a public meeting from 7 to 8:30 p.m. on Oct. 10 at the center’s community hall at 11713 Jollyville Road, Austin.

District 10 City Council Member Alison Alter and Amy Wong Mok, president and CEO of the Asian American Cultural Center will answer questions about proposed changes to the property and the zoning change process.

Preliminary plans for a senior living facility, updated child care center and a public teahouse and dumpling room at the Asian American Cultural Center are in early stages of the city’s permitting process, the center’s president and CEO Amy Wong Mok said.

The center, located at 11713 Jollyville Road, Austin, currently houses preschool and day care programs as well as cultural events but only utilizes about 30 to 40 percent of the land the facilities are situated on, Wong Mok said.

“The character of a community will be measured by how we treat our elders and our children so we are trying to do our part, meet that need and build a community,” she said.

While Wong Mok said she has been developing plans for the center for over three years, she made the formal zoning change request July 13. The project requires a zoning change from limited office use, or LO, to community commercial mixed-use, or GR-MU, to allow up to 80 to 100 senior living facility units as well as the tearoom and dumpling house. Any height variances will be subject to public input, Wong Mok said.

The zoning change case has not yet gone before the city's Zoning and Platting Commission, which needs to approve the plan prior to a final vote from Austin City Council.

District 10 Council Member Alison Alter sent out a notice Aug. 27 asking for input from community members interested in attending a public meeting regarding the project. A date for the public meeting has not been set yet.

The first goal of the project is building a new child care center that will replace the existing facilities and house the preschool and day care programs the Asian American Cultural Center already operates.

The next goal is building the new senior living facility, which already has 75 future residents on its waiting list, Wong Mok said. Ideas for the facility include opportunities for residents to play mahjong and ping pong and take classes on Taoism, Confucianism and calligraphy.

“We will provide a dining hall and place to play together and learn together,” Wong Mok said. “I think it is important when [residents] have people to socialize with and know they matter.”

Ultimately, all three components of the center will work together, she said. Seniors and preschool children will socialize in guided programs run through the child care center, and senior residents can contribute recipes for the public dumpling room.

“Dumplings are almost like tacos,” Wong Mok said. “Every family has its own recipe, and I’d like to utilize the seniors’ recipes.”

Wong said the project presents both an opportunity to support Northwest Austin’s sizable Asian population as well as create more programming for the surrounding community. Local residents can learn about the art of tea drinking and try the center’s dumplings.

“Our mission is to facilitate the meeting of the East and the Western culture and by enriching our programs we will be able to offer more cultural classes to the neighborhood,” Wong Mok said.
SHARE THIS STORY