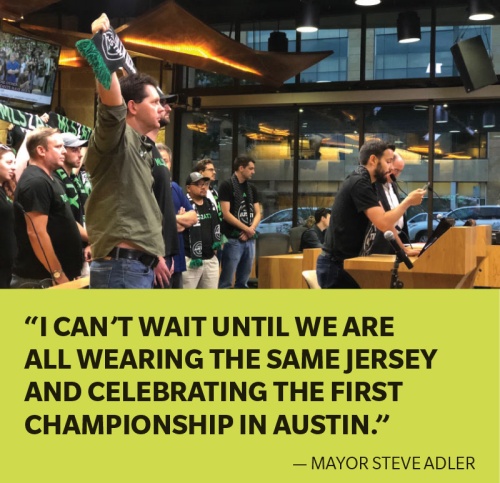 Austin City Council has taken a significant step in the process to bring the city’s first major league professional sports franchise to the city. On Aug. 15 council voted by a 7-4 majority to authorize a deal between the city and Precourt Sports Ventures, the investor-operator group of Major League Soccer team Columbus Crew SC, to build a MLS stadium at McKalla Place, near the intersection of Braker Lane and Burnet Road in North Austin.

“The city is excited about Major League Soccer. I am too,” Adler said. “I can’t wait until we are all wearing the same jersey and celebrating the first championship in Austin.”

In October, PSV Chairman Anthony Precourt announced his intentions to move the team from Ohio. The process leading to the Aug. 14 vote included nine months of deliberations a spirited back-and-forth from the public on both sides of the issue.

However, although the Aug. 15 vote was a major milestone, it is not the end of the process. City residents may have some significant questions remaining about what happened in the process up to this point, as well as what lies ahead.


What is included in the deal?

The basic structure of the agreement between PSV and the city has remained the same since the investor-operator group released its first proposal June 4. PSV will finance the $200 million stadium, while the city will retain ownership of the land and stadium.

However, there were some significant changes to the deal between the release of PSV’s first proposal and the final term sheet outlining the agreement—changes some council members said were crucial in leading them to support the agreement.

PSV originally suggested paying $1 per year to the city in rent, but under the term sheet agreement will instead begin paying $550,000 per year in rental fees beginning in the sixth year of its initial lease term.

Some council members believed the rent payment should be higher. Council Member Ellen Troxclair, who represents District 8, suggested rent of $958,720 beginning in the first year and escalating at two percent annually. District 4 Council Member Greg Casar said getting some form of rental payment was one of the changes in the negotiation process that allowed him to support the deal.

“I do think that process has yielded us something much better than where we started,” Casar said.

Council made a number of amendments to the deal before authorizing staff to negotiate the final agreement. Under those amendments, PSV will construct bus and transit facilities and pay $3 million over 15 years to Capital Metro; city council will have final approval over any ancillary development; and PSV will coordinate with a developer to build at least 130 affordable housing units on the site.


What are the next steps?

PSV plans to move the Crew to Austin in time to begin the 2019 season in March. The team then would play at a temporary location for two seasons until the stadium in North Austin is ready to open in 2021.

A legal case in Ohio could muddy the waters of the timeline. In March, Ohio Attorney General Mike DeWine, along with the City of Columbus, filed a lawsuit against PSV and  MLS to keep the team there.

DeWine and the city say the team must give Columbus officials notice of at least six months before any move, and during the notice period provide local groups a “reasonable opportunity” to buy the team.

The suit is based on an Ohio law that prohibits teams using tax-supported facilities and accepting financial assistance from the state and its localities from relocating without first following a specific process. The law passed in 1996 after NFL owner Art Modell relocated the Cleveland Browns to Baltimore. Following Austin City Council’s vote, Dewine tweeted that the lawsuit will continue.


What do local residents have to say?

Many North Austin residents were thrilled with the news.

“I was very pleased,” said Brock Williams, an avid soccer fan who lives in the Walnut Crossing neighborhood near Parmer Lane and MoPac. “I believe that City Council listened to the entire city of Austin.”

However, other North Austin residents remain concerned about the influx of traffic and how a stadium will affect their neighborhoods.

“I do not support it due to location issues; in fact I am actually heartsick that it was approved,” Milwood resident Karyn Flores said.