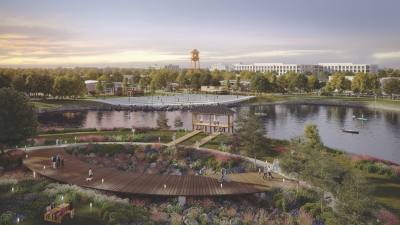 In May, Karlin Real Estate Group announced plans for an entertainment district anchored by a pond at the Parmer office park on Parmer Lane just east of I-35.

Parmer Lane—Austin’s corporate thoroughfare—along the northern parts of the city has long been home to familiar tech companies such as Apple, Paypal, General Motors, Dell and Samsung.

A new office park called Parmer Austin, a 300-plus-acre parcel of land on Parmer Lane just east of I-35, aims to tap into that tech hub. Five years ago Los Angeles-based Karlin Real Estate Group bought the property with the intent on building flexible, quality and affordable office space.

Bounded by Parmer and Howard lanes, McCallen Pass and Harris Ridge Boulevard, the park already had three former Dell buildings. In 2015, GM moved into one of those buildings, adding a second location for its Austin IT Innovation Center.

“Development of the park is based on demand,” he said. “We approached meeting the needs of the market in three ways.”

In 2016, The Home Depot took up shop in one of the new office buildings, and next year, 3M will move into two buildings at the office park. Karlin also closed in June on the purchase of the former IO at Tech Ridge Apartments on Parmer. The site had fallen into disrepair after its developer went bankrupt and left it unfinished.

“It’s a perfect complement [to Parmer Austin],” he said. “It’s an eyesore to our community and to us, so we’re looking forward to … revitalizing that plot of land.”

In May, the developer announced plans for an entertainment district anchored by a pond that is planned to open by next spring. Amenities will include an amphitheater and an incubator as well as retail.

“We see an opportunity to create an ecosystem for multiple craft breweries so you won’t have to travel between multiple breweries,” Emerick said. “We want to create a gathering space, if you will.”

But this live, work, play feel of Parmer Austin is not meant to compete with The Domain mixed-used development but rather complement its existing amenities.

“You can get experience of The Domain and amenities it provides, but it’s expensive,” he said. “We’re not trying to be The Domain. We offer the ability to scale and control and grow at the pace that is in line with [a company’s] needs.”

Emerick said CBRE is still seeing a lot of interest in office space in Austin, including from local firms and Fortune 500 companies looking to establish a presence in the city.

“When you look at the park and see Home Depot, 3M, Allergan, GM and Dell across the street—four Fortune 500 companies—that’s making a statement,” he said.
SHARE THIS STORY