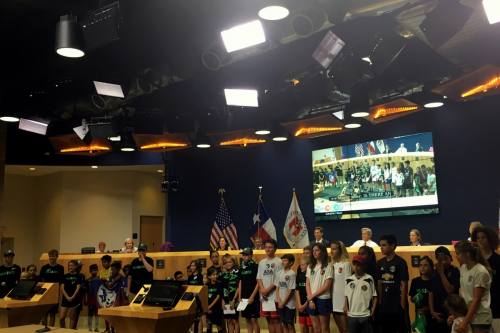 Austin City Council is moving forward with negotiations with Precourt Sports Ventures to build a Major League Soccer stadium as well as accept plans for other development at McKalla Place.

Austin City Council members approved a pair of resolutions in the early hours of Friday morning that could determine whether the city gets a Major League Soccer team.

The resolutions direct the city to begin negotiations with Precourt Sports Ventures to construct an MLS stadium as well as to also receive plans from other developers for the 24-acre city-owned property at 10414 McKalla Place in North Austin. Both items return to council Aug. 9 for further discussion and possible approval of a deal.

“The thing that is clearest to me is how we all want the best deal for this city, and I appreciate that,” District 7 Council Member Leslie Pool said. “I don’t think it’s a secret that I am less than impressed with PSV’s first offer. But it is just that.”

PSV submitted its proposal on June 1 to build a 20,000-seat stadium and relocate the Columbus Crew team to Austin. The soccer park proposal also includes a music venue and public access to the park for recreation and community events.

Two other local development groups have also pitched plans for mixed-use developments at the site.

Austin-based Capella Capital Partners is pitching a mixed-used project that would include 1,500 apartment units, office space, retail and restaurant space, 6 acres of parkland and a MetroRail station.

Local developers John Chen and Marcus Whitfield submitted an offer to the city June 8 to purchase the land for $22.5 million or lease the land for $2.2 million per year. Their proposal calls for at least 500 income-accessible housing units as well as studios for artists, grocery store, wellness hub, educational workforce, 7 acres of public parkland and a rail station.

Item 60, which allows the city to receive proposals for McKalla Place, passed on a vote of 8-1-1, with Sabino “Pio” Renteria voting no, Delia Garza abstaining and Ellen Troxclair off the dais. Item 130 to start negotiations with PSV passed unanimously with Troxclair and Ora Houston off the dais.

“I believe that there’s a good deal to be made here,” Mayor Steve Adler said.

However, council members are expected to be tough on PSV over a soccer stadium deal, including ensuring strong community benefits and affordable housing on-site.

“I won’t support a deal that doesn’t have significant community benefits,” Garza said.

District 4 Council Member Greg Casar, who has many constituents on both sides of the stadium deal, said it will be a hard balance to strike with those opposing views.

“If it doesn’t have affordable housing on-site and isn’t fiscally sound, I won’t support a deal,” he said.

District 6 Council Member Jimmy Flannigan stressed that approval of the two items does not equate approval of any deal.