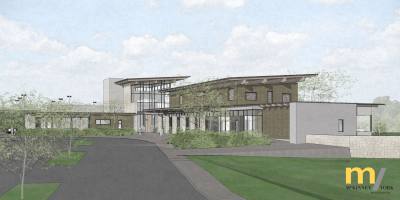 Great Hills Country Club is expanding with a new $12 million clubhouse and recreation building to replace its outdated facilities.

The Great Hills Country Club in Northwest Austin plans to break ground in the coming weeks on a new clubhouse that will cater to families.

General Manager Larry Harper said the new two-story clubhouse will be almost double in size of the existing facility at 5914 Lost Horizon Drive, Austin, in the Great Hills neighborhood near The Arboretum.

“The clubhouse was built in the late ’70s and for a different purpose,” he said. “There’s not a lot of banquet space and limited dining area because of the small kitchen.”

Construction is expected to take about 18-24 months for the $12 million project, and the existing clubhouse will remain open during that time and then be demolished for parking, Harper said.

The new 27,000-square-foot facility will have a larger dining area and a banquet hall that will serve as event space for member events. Plans also call for a 4,500-square-foot recreation building. Other new amenities will include larger locker rooms, a tennis pro shop, meeting rooms and a lounge area geared for children and teens.

“[The club] previously wasn’t as family-oriented,” Harper said. “Now we need to have facilities to serve that need.”

In 1985, the club’s members bought out the golf club and turned it into a private social club that has 501c7 status. Harper said now the club’s nearly 500 members consist mostly of families.

Membership at Great Hills Country Club is based on referrals. The club also offers a social membership for those who are not interested in tennis or golf.

Harper said Great Hills is one of just a couple of private social clubs in Austin, the others being Westwood and Austin country clubs.

“It’s a limited market and a niche market,” Harper said. “Most private clubs are separate and more community-type businesses. It’s more for the service of the community.”