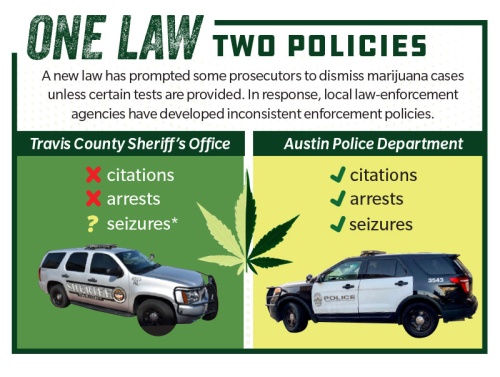 Hemp is grown from a strain of the cannabis plant and contains less than 1% of the psychoactive element tetrahydrocannabinol, or THC. It is used to make fabrics, body care products, food and plastics. Marijuana contains between 3% and 15% THC, according to research published by Biological Psychiatry.

Previously, law-enforcement agencies and prosecutors relied on tests of suspected marijuana to prove the presence of THC, officials said. Now, some prosecutors—including in Travis County—require tests that prove the concentration of THC in a sample is above 0.3%, the new legal threshold.

“There was no such thing as hemp before the bill passed,” Travis County Attorney David Escamilla said. “All of it was illegal.”

Only a few private labs around the country offer this type of testing.

A spokesperson for the Texas Department of Public Safety said the department estimates it will cost $8.5 million for the necessary resources to implement the new law.

Travis County District Attorney Margaret Moore and County Attorney David Escamilla have both said they will not accept marijuana-related cases without lab results. In response, local law-enforcement agencies have instituted inconsistent policies regarding the enforcement of laws related to marijuana, which remains illegal.

“We kind of have our hands tied for the misdemeanor, and even for the felony, cases,” Travis County Sheriff Sally Hernandez said.

The Austin Police Department is working to gain access to testing that is more affordable, Chief of Staff Troy Gay said. But some council members question whether tax dollars should be spent to prosecute low-level offenses.

“[T]he purpose of this bill was not essentially to be a quasi-decriminalization,” said Hunter White, communications director of the Houston-based organization Republicans Against Marijuana Prohibition. “That’s just an unintended side effect.”

After the law took effect June 10, Moore and Escamilla announced their offices would not accept marijuana cases unless accompanied by a test proving the THC concentration is above the legal limit.

“It’s an ongoing problem, and we continue to address it the best we can,” Moore said.

Her office handles felonies, which pertain to larger amounts of marijuana, and has recommended that law enforcement consult with her office on a case-by-case basis.

“At this point, there has not been a case that has been sent for testing because of the expense and the lack of budget to pay for [it],” she said.

Between June 10, when the law took effect, and Sept. 19, law-enforcement agencies filed 125 marijuana- or THC-related felony cases with Moore’s office; of those, 103 were dismissed, and the remaining 22 are pending, according to her office.

Informed that local prosecutors would generally not accept cases, law-enforcement agencies had to determine their own policies.

APD continues to issue citations and make arrests for marijuana charges, Gay said, even though those charges will not be prosecuted unless testing is conducted.

“We believe that in the urban environment that we are in, if we were not to take action, that we would see an increase in the consumption and the use [of marijuana],” Gay said, adding that crime—including violent crime—might also potentially rise.

APD estimates it will be able to test for THC concentration in the next six to 12 months, Gay said. Because the statute of limitations for most marijuana-related charges is two years, this allows for such charges to be prosecuted in the future.

The county sheriff’s office, however, directed its staff in a July 5 memo not to issue citations or arrests for marijuana-related misdemeanors.

“If the county attorney is not going to prosecute the cases without a lab report … our efforts and our resources need to be focused on other crimes that are going to be prosecuted,” Hernandez said.

Because of these policies, Austinites can receive different treatment for the same offense depending on where they are stopped and by whom.

But local officials and advocates for marijuana reform criticized  lawmakers for sowing confusion.

“This was not some kind of unforeseen occurrence,” said Jax Finkel, executive director of the Texas chapter of the National Organization for the Reform of Marijuana Laws. She added that legislators heard testimony about the impact this law would have on already overburdened labs.

“It is unfortunate, what comes from the Capitol, they don’t always contact or take into consideration the people who are having to enforce things,” Hernandez said.

Long before June 10, efforts were underway in Travis County to divert low-level, nonviolent drug offenders from the criminal justice system.

“Travis County has not aggressively prosecuted marijuana cases for ages,” Escamilla said. “We’re all about diversion.”

The Legislature passed a law in 2007 known as “cite and release,” allowing law enforcement to issue citations for certain eligible misdemeanors—including marijuana possession—rather than make arrests.

Individuals who are cited avoid a night in jail and are told to appear in court at a future date to go through an abbreviated booking process.

Travis County implemented this policy; the Commissioners Court amended it in 2012 to allow those who had received citations to take a class to avoid an arrest record.

More recently, in June 2018, Austin City Council passed two “Freedom City” ordinances, one of which was intended to reduce racial disparities in discretionary arrests—in cases eligible for a citation.

Although federal data shows similar rates of marijuana use across racial groups, in 2017 black residents comprised 32% of discretionary arrests for low-level marijuana possession in Austin despite comprising less than 8% of the population, per the ordinance.

Between Jan. 1 and June 30, APD made 98 discretionary arrests for Class A and B misdemeanors, which include marijuana possession, according to department reports.

With this law in effect and the Legislature not scheduled to reconvene until January 2021, law-enforcement agencies are working to access testing that meets prosecutor standards.

APD has been awarded a grant that would cover the costs of purchasing a machine to allow for testing of THC concentration, Gay said. But Austin City Council will need to approve accepting the award.

“We have serious concerns about the use of scarce taxpayers funds for these purposes,” Mayor Pro Tem Delia Garza and Council Member Greg Casar wrote in an Aug. 22 post to the council message board.

In addition to financial concerns, advocates for marijuana reform said attitudes are changing.

A 2018 University of Texas/Texas Tribune poll found 84% of Texas voters would legalize marijuana for some uses.

“[People are] starting to realize it’s always been costly for taxpayers to subsidize putting people away for possession of a plant—and it’s only getting more costly,” Finkel said.

Advocates for reform and prosecutors agree that more change is likely.