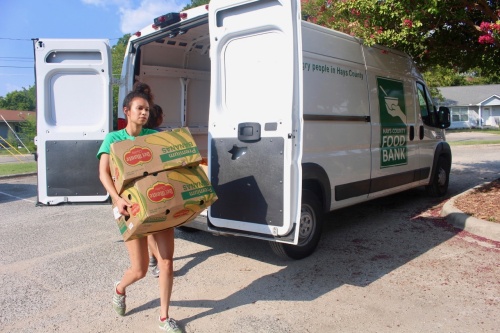 Hays County Food Bank relies on volunteers to serve those in need.

The mission of Hays County Food Bank is to improve lives through food assistance programs, nutrition education and advocacy, but without more support, in the future the organization may find itself unable to consistently keep up with the growing needs of the community.

In June, the nonprofit experienced a drastic shortage of supplies, which meant cutting food distribution across the county in half. San Marcos, Buda and Kyle residents responded with increased donations and support, but just as fast as community support comes, it goes, HCFB Communications Coordinator Mallory Best said.

“We need the community to remember about us all-year-round,” Best said. “Not just in November or December, which are popular months people donate. We need people to realize that we’re still here, even after a sudden increase of donations.”

About 3,000 pounds of food were donated in June as the community rallied to help with the critical shortage that the food bank endured. But HCFB estimates its needs as much greater. On average, about 15,000 pounds of food—including nonperishable items, fresh produce, breads, sweets and meats—are given out weekly to individuals, while 12,000-15,000 pounds of nonperishables are distributed to partner agencies each month.

The food bank has limited resources, such as storage space, funding and volunteers; it also has inconsistent variables such as donations and grants. Both mean that in the future, the food bank may see habitual shortages.

First established in 1984, HCFB originally served around 400 low-income households, and only in San Marcos. The organization has since grown to serve an average of 1,500 households in and around Hays County, distributing food each week at seven different sites, along with 26 partner agencies such as churches, school pantries, shelters and other nonprofits.

“When we reach capacity at HCFB headquarters, we have to outsource that overflow of food to our partner agencies,” Best said. “Our building is too small for the organization’s everyday operation. A bigger building for our staff and supplies would enable us to have more food on reserve, which could potentially help in another shortage.”

HCFB organizers prefer to have at least three months—or 30,000 pounds—of food in reserve. But with only 1,557.25 square feet of warehouse and processing space, it gets crowded, HCFB Chief Executive Officer Denise Blok said.

“We’re sort of in a catch-22 situation,” Blok said. “Sometimes the community doesn’t donate as much as we need, despite the growth of Hays County. We want to take and hold as much food as we can, but if our limited storage space is at capacity, we would lose efficiency with food rescue, sorting and other operations at our current building.”

With a goal of at least $10 million, HCFB has raised a little over $10,000 in capital campaign funds toward a new headquarters building.

As the population continues to increase, lines at HCFB food distribution sites may grow, with more people in need of help.

“I don’t know where my family would be without the food bank,” said Jessica Moore, an HCFB beneficiary. “With a family of seven and the cost of living going up, HCFB is a great resource for me to stabilize our situation until I get back on my feet.”

Hunger in the United States is often hidden but remains pervasive. More than 41 million Americans struggle with hunger, according to the national nonprofit Feeding America. In 2016, the U.S. Department of Agriculture estimated 1 in 8 Americans is food-insecure; in Hays County, that statistic is 1 in 7, while 1 in 5 Hays County children are considered food-insecure, according to HCFB.

“Because these numbers can change, either increasing or decreasing, we don’t always know if we’ll have enough food for those in need who come to our distribution sites,” said Best.

Most of HCFB’s financial support comes from grants and donations; these are used to fund programs and for general operating purposes.

HCFB Programs Director Ashley Hurst said she is constantly applying for federal grants, but the grants may not always be enough.

However, through its partnership with Central Texas Food Bank, the organization is able to rescue food weekly from large corporations, such as H-E-B, Sam’s Club and Target.

Every week families and individuals gather in lines with bags and bins to collect their portions of food at HCFB’s distributions site. Although HCFB’s main objective is to tackle food insecurity, the organization also offers cooking classes, nutritional information and help with social programs.

For example, the Kids Cooking Club is a class for children that will teach them how to cook inexpensive and healthy recipes. Kids will also learn kitchen safety, knife skills, measuring techniques and methods of cooking.

Also for children is the Child Nutrition Engagement Program, which includes lessons and games.

HCFB also has classes for adults, such as the Senior Nutrition & Wellness Program, which includes a stretching session, a nutrition lesson, and a food demonstration.

Both adults and children can attend the Food-Wise Cooking Class, a hands-on session about nutrient value of individual fruits and vegetables.

HCFB staff and volunteers also aim to help anyone struggling in other ways. Many staff and volunteers have been trained to navigate the state social service system by the Texas Department of Health and Human Services. They are available on a weekly basis to assist those in need with applications for heath care and other benefits.

Though the organization will continue its work, ultimately HCFB hopes to see the community step up to help the needy.

“The goal is to reach the most low-income households in the area,” Best said. “We hope to be accessible enough to anyone who is struggling with food needs or applying for social programs. Although the bank regularly receives food or grants from [our] donors, HCFB still heavily relies on the community.”