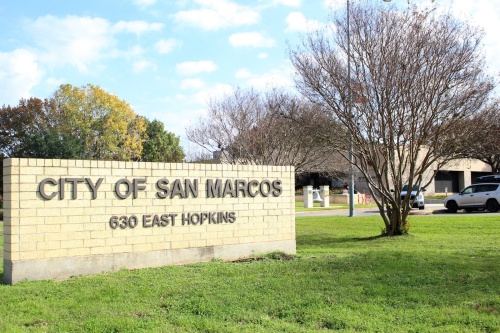 The city of San Marcos will not allow open carry of guns at certain public meetings when a new law that eases open carry restrictions in Texas takes effect Jan. 1.

House Bill 910, passed by the Texas Legislature during the 2015 session, eliminated the distinction between concealed and open carry of firearms. The new law also allows a person with a concealed carry permit to openly carry their firearm in a belt or shoulder holster. Concealed carry has been allowed in City Council chambers for many years.

City Manager Jared Miller said restricting open carry inside the council chambers might help ensure people do not feel threatened when they are getting into a “spirited exchange” with someone whose viewpoints are opposed to their own.

“I’m not saying it will happen, but it is possible that the open carry of firearms … could cause someone to not freely exchange their ideas if their ideas are directly opposite to that of an open carrier,” City Manager Jared Miller said.

Council had the option of allowing concealed and open carry or banning guns altogether during meetings that are governed by the Texas Open Meetings Act, such as City Council or Planning and Zoning Commission meetings. Instead, council members opted to ban open carry and continue allowing concealed carry.

If a meeting governed by TOMA occurs elsewhere in the city, such as at Dunbar Recreation Center or Embassy Suites Hotel & Conference Center, open carry of handguns would not be allowed within the room the meeting is being held in for the duration of the meeting.

Signs will be posted near the entrances of meeting rooms alerting attendees of the rule.

Nick Icossipentarhos, who teaches concealed carry classes in Central Texas, said banning all guns will do nothing to make City Hall and the City Council chambers safer. For 20 years the city has had a good relationship with those attending meetings who had a concealed firearm with them, Icossipentarhos said. He questioned why the city would put that at risk by considering an outright ban on firearms, concealed or open, at City Hall.

“You didn’t know about [who had a concealed firearm], and they didn’t want to reveal it, and things have gone splendidly,” he said. “The only thing the sign is going to do … it’s only going to keep the good guy from coming in here. The bad guy is going to come in here, do whatever and then leave. That’s all the sign will do.”

Council Member Scott Gregson generally agreed with Icossipentarhos, saying the city has not had any issues with concealed carriers attending meetings in the past. Open carry of firearms is something different though, he said.

“I do have an issue with the brandishing of open carry weapons in the audience, quite frankly,” Gregson said.

Council Member Jude Prather was the lone council member to vote against the measure, saying he could not support something that infringed on citizens’ Second Amendment rights.

Open carry will still be allowed at City Hall outside City Council chambers during meetings.