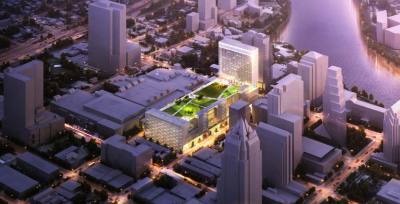 The document calls for a $400 million to $600 million, 321,700-square-foot westward expansion that could require eminent domain to acquire the necessary land. Gensler & Associates, a San Francisco-based consulting firm with an office in Austin, was hired in March 2014 per a City Council resolution to outline all potential Austin Convention Center expansion plans before singling out any recommendation.

Council members twice this week—during an Oct. 12 Economic Opportunity Committee meeting and again during an Oct. 13 work session—discussed details of the Gensler plan. The council committee ultimately did not vote in favor or against the master plan, leaving the full council to decide Oct. 15 whether to support the document. This rendering shows where the city is considering expanding Austin Convention Center. Portions of Second and Third streets would be vacated to accommodate the expansion, according to the city.[/caption]

"I have a concern about this tourism and hospitality industry. It feels like a giant that just keeps growing and growing and has to be fed, so there's some unintended consequences," District 1 Council Member Ora Houston said Oct. 12 before postponing any potential endorsement. "I need more time to understand if we have to continue to feed this giant."

Gensler principal Alan Coyler told council members Oct. 13 his firm considered every alternative, including no expansion and moving the convention center beyond downtown, before concluding a westward expansion was the city's best option. His team also worked on a conceptual design that calls for building ground-floor retail and restaurant space within the proposed convention center extension.

"We don't want people to just think that this is just going to be a big box that kills more blocks in downtown," Coyler said.

"[Panelists want to see the city] develop a center with a bit of a 'funkification' look, which means make it local, make it Austin," Capron said. "Feedback mostly said the existing building looks like a prison. ... It's a big box focusing inward and not outward."

Capron suggested that Austinites and tourists alike would support a project that incorporated more local flair and community spaces. The long-range master plan does call for a 3-acre urban park atop the expanded convention center should the city proceed with the plan as it is currently outlined.

Before approving any expansion plans, District 4 Council Member Greg Casar expressed interest in first seeing what other projects could be financed using the same money source that would fund the facility's growth.

"I just want to understand before we endorse a plan with this much of a financing opportunity that I know what the other opportunities are," Casar said.

Mayor Steve Adler agreed now is the best time to see what other options, including a potential new arena, could be on the table.

However, most council members did not reveal whether they intend to support the proposed plan. Should the plan pass Oct. 15, city staff would still need council approval before any land acquisition, financing or construction activity occurs, said Mark Tester, director of the city’s Convention Center Department. Voter approval would also be necessary, he said, to reallocate a 2-cent hotel tax toward any expansion plans.

Tester's ideal timeline includes taking such a request to voters in November 2016, with the expanded Austin Convention Center opening by the end of 2021 should the item receive voter approval.

Other Oct. 15 council items of interest include: