Palmer's Restaurant sits shaded by a grove of trees on the edge of the historic district in San Marcos. The building was built in the 1920s, and the restaurant has been open since 1978.

When Monte and Kristin Sheffield took over the restaurant in 2010, they were faced with the dilemma of whether to close it for a complete overhaul or continue on its course.

It was then that the two made a decision that has come to define their business philosophy.

"Instead of buying the building and shutting down for months and months of renovations and then rehiring the staff, we decided to make it a turnkey operation because of the foundation that Palmer's has had going back to 1978," Monte Sheffield said.

Keeping the local community strong and the history intact has become a sort of mantra that guides many of the decisions the Sheffields make, as is evident in the ingredients the restaurant uses in its dishes.

"Local outsourcing is extremely important to us," he said. "We do our best to buy as local as possible."

The pecans on the spicy pecan-crusted salmon come from Seguin, while the coffee in the chocolate chip bread pudding is from Austin, and the eggs in the Honcho Frittata are from Lockhart and other Texas farms.

From the draft beers to the honey accompanying the toast at brunch, Texas-based products can be found all over the menu.

"It seems kind of crazy when we're trucking and flying [in] food from across the country when you could get it right here in your area," he said. "But the main thing is that we're taking care of a local family and keeping that money here in

Sheffield said his greatest passion has been bringing a variety of culinary creations to the Hill Country.

He began his culinary career in New Orleans and creates most of the restaurant's signature dishes himself.

That influence is clear in the restaurant's seafood offerings, such as fresh oysters on a half shell, as well as the high priority given to brunch.

"San Marcos was in need of a face-lift when it comes to a good brunch establishment, and the Palmer's courtyard just exudes that feel," he said. "That courtyard, I think, even rivals the courtyards in New Orleans."

Operations Manager Ava Sargent has been with the restaurant four years and experienced the transition of ownership firsthand.

"Monte and Kristin are definitely bringing a very fresh outlook to our traditional style of service that we've done," she said. "Monte is doing a lot of things to open us up to events, catering and dining that we were a little too pricey on before."

Sargent said that "fresh outlook" has not undone any of the restaurant's 34-year history.

"I always tell all of our new servers, it seems like silly information, but we have people who come here once a year because this is where they got married or this is where they had their reception," she said. "This place holds a lot of memories for a lot of people."

The restaurant is preparing for its third year competing in the Hays County United Way's Boot Scootin' Foodie Awards, where it has won the Best Restaurant and Best Margarita awards the past two years.

"We're just trying to exceed the expectations of every diner that could possibly be seated at a table," Sheffield said. "That's part of our business, exceeding those expectations."

The complex will offer 234 fully furnished apartment units with a variety of floor plans, a fitness center and outdoor lounging areas.

A group of activists in Hays County caravanned downtown San Marcos on June 30 to demand the release of pretrial detainees.

The Hays County Commissioners Court struck an agreement with Texas State University at a June 30 meeting to quarantine first responders who have had potential exposure to the coronavirus. 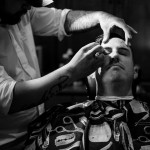 The barbershop offers a complimentary glass of whiskey when receiving a traditional service that includes hot towel shaves and beard trims.