2012 marks completion for many area tollways

This year, slightly more than 47 miles of toll roads will open to traffic, representing the largest addition to the system since tollways made their debut in the region in 2007.

"The gas tax, which used to be the main source of funding for new roads, hasn't changed for over 20 years, but the cost of building roads has gone up," said Doug Woodall, director of operations for the Central Texas Turnpike System, which oversees operations for Loop 1, Toll 45 and Toll 130.

"There are few other ways to pay for new roads than making them tolled, so I think we will see more and more of them in the future," he said.

Segments 5 and 6 of Toll 130—stretching 41 miles from where US 183, Toll 45 SE and Toll 130 meet southeast of Austin to I-10 just north of Seguin—are scheduled to be open to traffic by fall, Woodall said. Toll 130 currently extends 49 miles from Georgetown to the intersection of those three highways.

The additional segments, which cost $1.35 billion to design and build, will complete Toll 130. Although originally envisioned as an alternative to I-35, the road has not quite lived up to that idea.

The discrepancy is due to Toll 130's location, Woodall said.

"Building the road closer would've gotten a lot more traffic off of I-35," he said.

The expressway was built farther east than many officials had anticipated after the federally mandated environmental review process, which includes the collection of public input, revealed that it was what residents and stakeholders preferred.

Woodall said Toll 130 would be put to best use when developments like the Stone Hill Town Center shopping complex, where Toll 45 meets Toll 130 in Pflugerville, crop up along the roadway.

"Opening up a new highway, we figured there would be some sort of development, either office parks or commercial/residential development along [Toll] 130, and that just hasn't occurred yet," Woodall said.

Also this year, the first of two phases of the Manor Expressway, a tolled roadway and free frontage road along Hwy. 290, will open to traffic, said Melissa Hurst, a spokeswoman for the Central Texas Regional Mobility Authority, the organization that is spearheading the development of that road.

Phase 1 starts at US 183 and stretches 1.4 miles to east of Chimney Hill Boulevard. Eventually, the expressway will stretch east of Parmer lane into the City of Manor.

"The cities of Manor and Elgin continue to boom," said Mario Espinoza, deputy executive director for CTRMA. "That corridor is really growing and is zoned for development."

In another prime growth area, the 5-mile Toll 183A extension that will expand the toll road from its current end point at RM 1431 in Cedar Park to north of RM 2243 is opening in the spring.

The environmental review process for the MoPac Improvement Project, which aims to relieve traffic congestion on the highly traveled route, is slated to be finished by late summer or early fall 2012, Hurst said. CTRMA, the project's lead sponsor, expects to begin construction in 2013.

The recommendation moving forward to the Federal Highway Administration for approval is to build one express lane in each direction between Parmer Lane and Cesar Chavez Street that that would be free for transit vehicles and van pools. Drivers on the express lane would pay a toll.

Still unknown is when Toll 45 and southbound I-35 will get a direct connection so that drivers on Toll 45 do not have to exit onto a frontage road before taking I-35 south.

Woodall said bridge abutments are in place to sustain the infrastructure of a direct connection, but funding for the approximately $55 million project has not been identified.

He said the construction of direct connection would most likely fall to the TxDOT Austin District or the City of Round Rock.

What is an environmental review?

By federal law, each transportation project must go though an environmental review, but few understand what that actually means.

"People think it's just an assessment of the trees and the impacts on the habitat, which it is, but only part of it," said Mario Espinoza, deputy executive director for the Central Texas Regional Mobility Authority. "It also has to do with the schematics, how much right of way to acquire and public input on the impact on the neighborhoods."

The results are presented to the Federal Highway Administration for review and approval prior to shovels hitting the ground.

The MoPac Improvement Project is currently undergoing an environmental assessment. 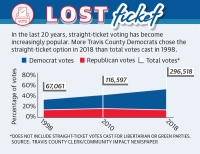