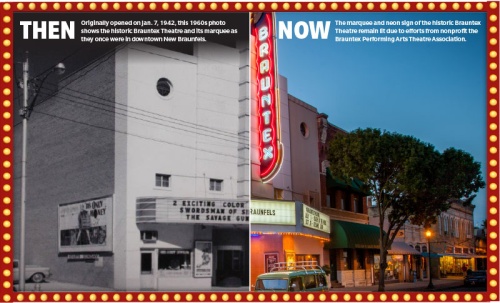 With the flip of a switch, history was restored in downtown New Braunfels in August 2000 with the reopening of the Brauntex Theatre, a former World War II-era movie palace.

A long-running joke, the “Brau,” as local residents affectionately called it, was given new life and a new purpose when the enormous neon sign sprang to life above San Antonio Street.

In the two decades since the Brauntex has continued to provide expressive cultural and entertainment experiences for the people of New Braunfels.

A former movie palace that opened less than a month after the bombing of Pearl Harbor, the Brauntex acted as a dual movie theater from 1972-98 and has given thousands of patrons a first-hand look at the famed architectural style that was most common during pre-World War II days.

For more than seven decades residents of New Braunfels and surrounding areas have been drawn to the historic theater.

The Brauntex Theatre was placed on the National Register of Historic Places by the Texas Historical Commission in 2008, and after more than $3 million in contributions were raised, the BPATA remodeled the lobby and restrooms, installed central air conditioning, replaced carpeting and reconstructed the theater stage.

In 2012, dressing rooms were added, and in 2017 the BPATA made a decision to replace the theater roof and green-light ceiling refurbishments.

The theater parking lot was resurfaced earlier this year, and today the historic Brauntex Theatre regularly hosts concerts, musicals, and recitals for people of all ages.

The theater also houses a number of local nonprofits, such as Life Bridges and the Kid’s Club of New Braunfels; an after-school program that works with New Braunfels ISD and Comal ISD to put on workshops, and an annual showcase.

The BPATA continues to work toward preservation and refurbishment of the historic Brauntex Theatre and in the future plans to update the theater’s technology, enhance capabilities for disabled patrons and develop a location to showcase theater archives.