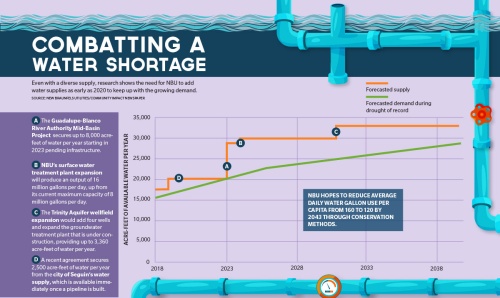 Even with a diverse supply, research shows the need for NBU to add water supplies as early as 2020 to keep up with the growing demand.

In late May, New Braunfels Utilities approved a strategic water resources plan that will help guide accommodations for the next 20 years.

“So we looked at supply and we projected demand,” NBU Chief Executive Officer Ian Taylor said.

The plan, which will be updated every five years, details how NBU will ensure an adequate water supply for its service area, which falls in one of the nation’s fastest-growing regions.

Taylor said population projections outlined in the plan were determined by analyzing Round Rock, Georgetown and San Marcos because the cities are in close proximity and have experienced similar growth patterns. According to the data, New Braunfels is expected to grow at a rate of 6 percent per year through 2025. After that, the growth is forecasted to slow to an annual 3 percent increase.

In addition to population influx, periods of drought are another challenge addressed in the plan. While creating the guide, officials accounted for measures that would be needed if the region’s worst on-record drought was repeated. The drought of record—or DOR—occurred in the 1950s.

Is New Braunfels at risk for running out of water? Taylor said this is the concern he hears from many residents as they watch the population continue to increase.

“What they’re seeing around them and what’s causing the alarm is exactly what we’ve planned for,” Taylor said. “It was done very thoughtfully.”

In addition to concerns for drinking water shortages, Helen Ballew, vice president of the Comal County Conservation Alliance—whose mission is to preserve local land, water and wildlife—stresses the relationship between groundwater and surface water.

“Some people might say you have this vast amount of water underground, but when you pump it out that means your springs go dry, your rivers go dry and then your economies dry up,” she said.

In 1991, NBU became the first consumer of the Edwards Aquifer to diversify its water supply. Currently, NBU draws water from several sources. The Guadalupe River and Canyon Reservoir are surface water supplies, and the Edwards and Trinity Aquifers are groundwater supplies.

For surface water, run-of-river rights from the Guadalupe River are available to NBU, but only when the flow of the river exceeds 113 cubic feet.

Water stored in the Canyon Reservoir is reliably available through a contract with the Guadalupe-Blanco River Authority.

Even with a diverse supply, research shows the need for NBU to add water supplies as early as 2020.

The GBRA Mid-Basin Project is outlined in NBU’s plan and secures 8,000 acre-feet of water per year starting in 2023 pending infrastructure. NBU also recently secured 2,500 acre-feet of treated water per year from Seguin’s water supply that is available immediately once a construction pipeline is built.

“So it’s this regional approach when you look at water planning in the state of Texas. It’s got to be regional,” Taylor said.


More from the plan

In addition to adding new supply sources, NBU’s water resources plan accommodates future growth in two significant ways: by increasing the output of treated water through the addition and expansion of water treatment plants and by implementing conservation and nonrevenue water programs.

NBU’s groundwater treatment plant that is associated with the Trinity Aquifer is expected to be complete in the next couple of months, said Trino Pedraza, director of Water Services for NBU. The plant’s output will exceed 3,700 acre-feet of water per year.

NBU’s surface water treatment plant is also being updated to produce an output of 16 million gallons per day, which is double its current maximum capacity.

NBU is also looking at becoming the fourth region in the state to implement an aquifer storage and recovery, or ASR, system that would allow water to be stored in an underground reservoir that could be accessed during dry periods. Geophysical testing is underway at a brackish portion of the Edwards Aquifer near the New Braunfels Regional Airport, and NBU hopes to move forward with installing the first water injection well by fall 2019.

“Right now preliminary data is showing everything to look very positive for us,” Pedraza said.

NBU outlines its strategy for reducing average daily water gallon use per capita from 160 to 120 by 2043, and “you don’t just do that by trying harder,” Taylor said.

To view the full version of NBU’s water resources plan, and for more information about rebate incentives, visit www.nbutexas.com.
SHARE THIS STORY