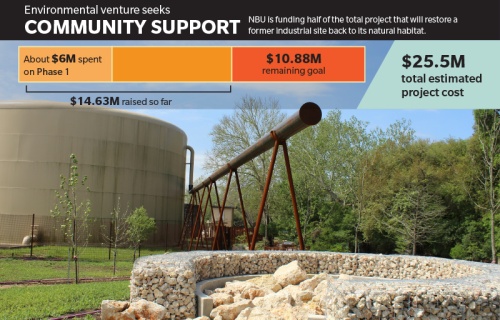 New Braunfels Utilities is working to complete the environmental restoration of a 16-acre site situated along the Comal Springs.

Along the fault line that separates the Texas Hill Country from the Texas Coastal Plain, the largest freshwater spring system in Texas emerges from the ground in New Braunfels.

New Braunfels Utility owns the 16-acre spot in the northwest part of town where the spring waters manifest and continue through Landa Park to feed the Comal River. From 1940-2004, the property was used by NBU as a fleet and facilities yard, but the company is currently spearheading a $25.5 million project to transform the human-altered site back to its natural form.

“NBU has shown that they live up to their mission and vision,” said Nancy Pappas, managing director for the Headwaters at the Comal project. “Part of that is to be a good steward of the resources that they have and to be a good community partner.”

The idea for the Headwaters at the Comal environmental restoration project began after NBU outgrew the location in 2004 and moved its operations to the current service center on FM 306, leaving the site as an old and mostly unused industrial property.

Judith Hoffmann, an NBU board member and professor at Texas Lutheran University, teaches social entrepreneurship, a subject that addresses ways to build up the poorest people in a community for the greater good.

When the site is finished, Pappas said there will be a 94 percent annual reduction of pollutants that flow from the rainwater surrounding the site into the springs.

“Close to 12,000 pounds of [pollutants] in a normal rain year go into the Comal springs,” she said. “A significant effort was made into understanding the hydrology of this site and the way the water flows across it and then coming up with natural ways to slow that water down and channel it the way we want to go and have the native plants and grasses clean it through their root systems before it gets back into the spring system.”

NBU worked with San Antonio-based Lake | Flato Architects to create a vision for the Headwaters project.

During the 1930s, federal funding was used to put people to work cleaning up the Comal springs area and walling it off, eventually capping one of the springs. Phase 1 of the Headwaters project began in August 2016 with removing one-third of the spring cap to allow the environment to function naturally. The Comal Springs is home to four endangered species that will better be able to thrive as a result.

Some programming has started, such as community preview days, water resources education and a backyard bird count collaboration that uses citizen science to help scientists understand what is happening with birds in local communities.

Unearthing the site has also provided a unique opportunity for scientific discovery that gives insight into the past.

“The last 1,000 years isn’t really here because it’s all been removed, but the older archaeology (is here),” Pappas said.

Some evidence of ancient habitation that has been discovered so far are rock ovens and tools, which are the property of the Texas Historic Commission. In the future, NBU will be able to borrow the artifacts and display them. Fundraising Efforts

So far, $14.63 million has been raised for the project, including an $11.6 million contribution from NBU. An additional $10.88 million is needed to complete the project.

“This is where we really need the community to come along,” Hoffmann said. “We would love to have everybody say, ‘I helped build this,’ from kids with their pennies to a wealthy person who says, ‘Here’s $10 million.’”

Pat Wiggins has invested in several properties in New Braunfels, including the downtown McAdoos Seafood Co. and the Headwaters project. He said Phase 2 is going to take sizeable donations from individuals and institutional investors.

“I just foresee this being an area that’s going to have a lot of community recognition,” Wiggins said. “Whether it’s a name on a brick or a building, there’s just so much opportunity. I think it’s important for people to see that they get to make their mark on something unique.”

Building construction is the focus of Phase 2. Once complete, more programming will be introduced that educates the community about water, recycling projects and other environmental topics.  The final phase will also add monumental and wayfinding signage, additional trails, landscaping and parking.

While New Braunfels is known for Schlitterbahn and Wurstfest, Hoffmann hopes the Headwaters at the Comal will one day top the list.

“It’s almost as if, if [the Headwaters] could talk, I can almost hear it saying, ‘Thank you, because you have restored me back to health,’” she said.