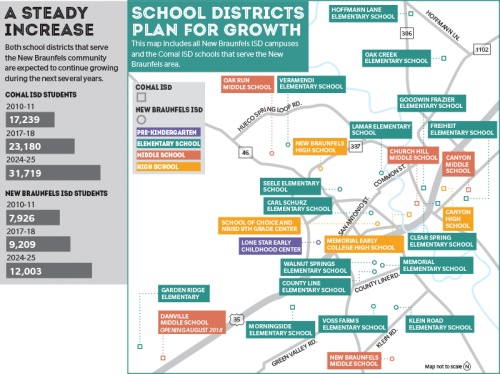 Both school districts that serve the New Braunfels community are expected to continue growing during the next several years.

As New Braunfels grows, the two school districts that serve the region also face unique challenges to keep up.

“One of the challenges is that if you split before you have the right number of students, [other districts] struggled running two high schools and having the same number of programs at each high school,” Moczygemba said. “Yes, we’re out of capacity, but when you open the new campus, you’re dividing the population in half.”

In the meantime, to accommodate for the current student population, NBISD opened the current New Braunfels Middle School campus in 2012  to serve students on the east side of I-35. Oak Run Middle School, which was a sixth grade-only campus until 2009, now serves sixth-, seventh- and eighth-grade students to the west of the interstate.

The district also incorporated a one-grade-level campus, The NBHS Ninth Grade Center, that is housed in the former middle school campus on Guenther Street. In addition New Braunfels’ eighth and ninth elementary schools—Veramendi and Voss Farms—opened in August.

The current New Braunfels Middle School campus was constructed on property the school district originally purchased for a new high school. The core areas were built to serve 2,500 students, and the campus accommodates the addition of two more classroom wings. However, Moczygemba said it is unclear if the campus will ever be used as a high school, meaning a separate new high school would be needed in the future. Moczygemba cited one reason for the change as the addition of the Veramendi mixed-use development that is currently underway. The project, which will add up to 6,000 new rooftops in the community, has increased the projected number of high school students from 4,500 to 6,200 at the school district’s complete build-out.

A facilities committee has been working since January 2017 to come up with solutions to the district’s growth challenges, and it is expected to present a long-range facilities plan to the school board in 2018.

“My goal with the long-range facilities plan is to not take any option off the table for future boards and administrators,” Moczygemba said.

CISD is currently made up of 27 campuses, 11 of which serve the New Braunfels area.

“You will find other school districts in Texas that are similar size—not a lot—but usually they’re in West Texas where you might have a large land mass, but they have very little student population,” said Steve Stanford, executive director of communications and governmental relations for CISD. “I think what makes us unique is that we are large, and we’re densely populated on the [Hwy.] I-35 and 281 corridors.”

According to Stanford there are three ways school districts keep up with growth: through the use of portable buildings, by building new schools and by redrawing boundaries within the district.

At its regular meeting Dec. 14, the CISD board of trustees approved new attendance boundaries to accommodate two new middle schools that will begin operations in August. The new campuses, Danville Middle School and Pieper Ranch Middle School, were funded through a 2015 bond package.

In addition to the new middle schools, two new high schools that received funding from a 2017 $263.5 million bond package will open in 2020 and 2021. Stanford said the district is looking at a possible May 2019 bond initiative that would address elementary schools.

Both school districts use demographers to help predict future growth patterns, and NBISD holds a license for its own demographic software package. The city of New Braunfels also aids in those predictions by following state requirements to communicate changes that allow more residents.

“We notify both school districts of everything—all rezoning requests and subdivision plats,” said Christopher Looney, the city’s director of planning and community
development.

“That can have an impact, too. Those are jobs that will bring more people to the area,” he said.

Looney is overseeing the city’s comprehensive plan that will be adopted in coming months, and Moczygemba as well as CISD Superintendent Andrew Kim serve on the steering committee for the project.

“To have both superintendents involved at the steering committee level provides a great insight for the school district and city to be on the same page about anticipated growth,” Looney said.