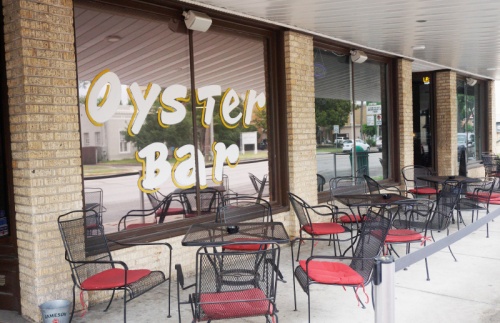 Oyster Bar features a front and back patio.

Christina Cinotto showed up to work as a waitress at Oyster Bar the day it first opened, on Oct. 23, 2003. A decade later, Christina walked into the Oyster Bar as a co-owner, joined by her husband, Dave Cinotto, and Nathan Vosper.

Having helped the bar transition to new owners in the past, Christina brought her knowledge of what worked best to the Oyster Bar when they bought and revitalized it in 2013.

The three co-owners updated the menu from cold food only to a full menu from the hot kitchen. They also made it one of the first to voluntarily become non-smoking, before the city of New Braunfels mandated it in 2017.

The co-owners bought an adjacent space in 2016, expanding the restaurant from 2,200 square feet to 5,000. There are several games in the addition—which is a 21-and-over-only space, ensuring adults have access to the pool table, shuffleboard, and other games. Events are hosted throughout the week, including pool tournaments on Wednesdays, live music on Thursdays, and a DJ on Saturdays.

Christina said when she worked the original opening night in 2003, there were only a handful of eateries and bars in downtown New Braunfels. Now the area has developed into a bustling destination, though Oyster Bar remains one of the only options open for late-night food. Guests will typically find her running one of the two bars in the restaurant.

Vosper, the chef for Oyster Bar, said the most popular item is oysters. However, some of his favorite items include the candied bacon sliders and the wings.

Dave, a born and raised New Braunfels native, works as the general manager for the bar. He said they work to reduce waste by recycling three to four times a week. Valuing his local area extends to his food as well, sourcing tortillas and bread from the nearby Naegelin’s Bakery.

“Everything is made in-house and in small batches,” Dave said. “All the way down to in-house dressing and croutons for our salads.”