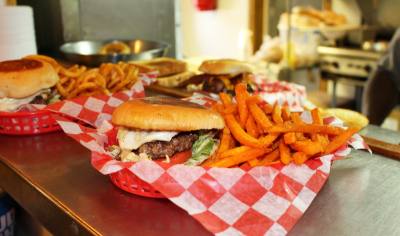 Twelve years ago Mike Reimer noticed a “for sale” sign outside of the quaint metal structure known as Freiheit Country Store, and his daughter persuaded him to buy the property.

“I bought it because it was one of the last things that hasn’t changed in this town,” said Mike, who was born and raised in New Braunfels and spent decades working in the public school system. “It’s just like it was when I was a little boy.”

The restaurant is known for its hamburgers, which are served on buns from Naegelins Bakery in New Braunfels. Additionally all of the restaurant’s meats come from the local Granzin’s Meat Market. Other popular menu items include the chicken-fried steak, a fresh salad bar, hand-cut french fries and wings.

Two years ago Mike built a new bar and stage in the back of the building, and he said guests who stop by to catch live music enjoy a smaller, more intimate experience. Mike’s son, Cody, books the bands and also has a dish named after him in the restaurant.

The Cody Reimer Special is a local favorite and features nearly a pound of fresh ground hamburger meat smothered in grilled onions, jalapenos and mushrooms with brown gravy and cheese, complete with french fries and Texas toast.

Next on the agenda for the establishment is the Ice Cream Shoppe at Freiheit that will include banana splits, sundaes and custom shakes. The new addition will also offer a free spot to host children’s birthday parties, Cody said.

In addition to being featured in Turnpike Troubadors’ music video for their hit song “Gin, Smoke and Lies,” Freiheit has been the site for many local fundraisers. Mike said he enjoys giving back to his community.