Mayfair, a 1,888-acre mixed-use development slated to be built over the course of 15-20 years, is on track to break ground soon as developers finalize agreements with the city and other entities.

The project, which has the potential to bring thousands of new residents to the New Braunfels area over the next 20 years, could break ground as early as the first quarter of 2022 pending the approval of a utility agreement with New Braunfels Utilities, said Thad Rutherford, CEO of SouthStar Communities, the development company behind Mayfair.

Mayfair is located in the extraterritorial jurisdiction, or ETJ, of New Braunfels on property that was previously owned by the Texas General Land Office, Rutherford said.

Over the next 15 years, SouthStar is anticipated to build up to 6,000 new residences that will include single-family homes, townhomes and multifamily units. Homes will span a range of price points and will include affordable and workforce housing.

“This isn’t just another housing subdivision,” Rutherford said. “We’re going to have some potential for industrial or data centers or other things that will only benefit the city of New Braunfels from an economic development standpoint.”
RELATED STORIES 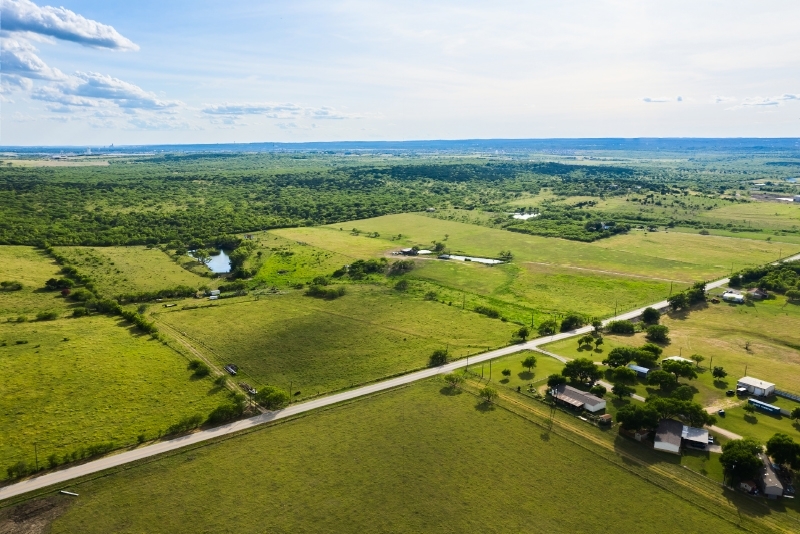 As the city continues to grow and employment opportunities expand throughout Central Texas, Rutherford said Mayfair will address the need for more housing options around New Braunfels.

Some residents have voiced concern that the project will put strain on the city and its citizens, but Johnnie Rosenauer is hopeful that Mayfair will be built responsibly. Rosenauer has taught real estate at universities throughout the state for 50 years, written books on land stewardship and is a farm and ranch real estate broker. “We can be unhappy about this growth, but it’s not unexpected, and it’s certainly not haphazard, like it was in times past,” he said. “It’s more regulated, it’s more diverse, it’s more planned out, because these projects begin years before the first shovel of dirt is dug out.”

The development is expected to incorporate 300 acres of public parks and greenspace, a variety of commercial properties and a 160 acre employment park. A study conducted by TXP Inc., an economic analysis and public policy consulting firm, estimated that the development will create 2,000 permanent jobs.

“This is the right type of growth,” Rutherford said. “It’s going to stimulate [the area] economically and hopefully create good places for people to live and work and go to school.”

Creating a blueprint for development

Because Mayfair is not within city limits, there are limitations to the city’s ability to regulate development through zoning, landscaping, building and safety requirements, according to the city.

Rutherford and his team have worked with city staff since January 2020 to establish a development agreement with the city, which was approved by the New Braunfels City Council on June 28.

The council also voted unanimously to approve the creation of a Water Improvement District, or WID, that will cover the development.

By approving the agreements, the city gained the right to oversee the project and impose regulations, Jewell said, and the developer will be able to use tax revenue generated in the district to reimburse part of their expenses associated with constructing necessary infrastructure.

“The beauty of the water improvement district is it operates and maintains everything within this boundary,” Rutherford said. “It’s really a self-contained community.”

The agreement states the city is able to regulate land use, urban design, transportation, parks, open spaces, sustainability and economic development within the property.

A similar process was used for the 2,430-acre Veramendi development and city staff used Veramendi’s development agreement as a foundation for the agreement with Mayfair, Jewell said.

Envision New Braunfels was finalized in 2018 and is the city’s comprehensive plan that was created to provide developers and officials with guidelines for future developments and revitalization efforts in downtown New Braunfels, Jewell said.

“We took a lot of the goals and objectives and strategies out of [Envision New Braunfels],” Jewell said. “We weren’t plucking things out of thin air, we were referencing a plan.”

Some of the key goals within the comprehensive plan that Mayfair developers are working to address include connectivity to area roads, public outdoor space, diversity of housing and employment opportunities, Rutherford said.

Work on the development is slated to begin on the East side of the development along the I-35 North frontage road, Rutherford said. This will allow those accessing the development to utilize completed portions of the highway currently under construction by the Texas Department of Transportation. An underpass connecting the I-35 frontage roads between Watson Lane and Kohlenberg Road will connect the two sides of Mayfair, which are currently split by the highway, Rutherford said, and SouthStar will conduct traffic impact studies to determine how proposed projects will affect the development and the surrounding community. Rosenauer recognizes the development will likely bring more traffic to the area but he is hopeful the developers will work with officials to mitigate the effects of such a large project on area roads. “None of us are going to be immune from it but if it’s going to happen, it needs to happen in a reasonable, well thought-out, governed manner and I think our folks are trying as hard as they can,” Rosenauer said.

While the city will play a role in ensuring road projects connect with area roads, officials will primarily focus on large-scale decisions and plans, Jewell said.

“We don’t want to get over regulatory, but we wanted to get the right regulations and get the outcomes that we wanted,” Jewell said. “The only involvement that the city has is having a sphere of influence and regulatory checks on projects that it wouldn’t otherwise have.”

Tapping into a water source

Before development can begin in earnest, SouthStar and New Braunfels Utilities must finalize a utility agreement that would give Mayfair access to water and wastewater resources, Rutherford said.

Mayfair is located outside New Braunfels Utilities’ Certificate of Convenience and Necessity region, which is the area in which the utility has the exclusive right to provide continuous and adequate retail water or sewer utility service, according to the Texas Water Code.“We make sure that we have water so the greater New Braunfels community can continue to grow,” NBU CEO Ian Taylor said. “When it’s outside the CCN, we don’t have an obligation to serve, therefore we serve by contract ... Through that contract there are certain ways that we can recover costs.”

Through the contract, Mayfair will pay for access to water resources and to construct infrastructure like storage tanks and pipelines, Taylor said.

The details of the agreement have not yet been finalized, and Rosenauer said some residents are concerned about the strain the development could put on the area’s water resources. Rosenauer has dug and observed water wells on ranches for many years and is aware of the challenges of providing usable water in a region that experiences high evaporation rates, and said it is difficult to determine how much water a region truly has access to. “I don’t know anybody that knows exactly how much water’s underneath [the ground],” Rosenauer said. “We’re speculating on our concerns. Legitimate concerns, but [there is] no real hard data that I’m aware of in terms of what is our true capacity.” 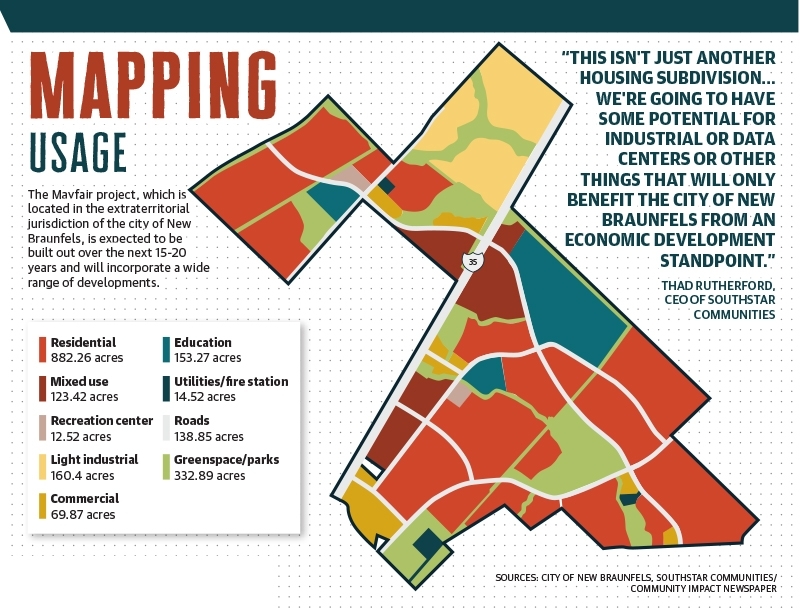 SouthStar will pay unit costs to cover the supply necessary for Mayfair, said Ryan Kelso, chief operations officer for NBU. Conservation mechanisms have also been incorporated into the agreement to ensure the water used by the development is allocated effectively.

One acre-foot is the equivalent of 325,851 gallons. While NBU reports having contracts to access 50,375 AFY, only 24,920 AFY is considered deliverable for public use.

One of the first projects to be built in partnership with the Mayfair development is the FM 306 pump station expansion, Kelso said, which will increase the amount of water NBU is able to transport through its system. “A lot of the infrastructure projects that we have in our capital plan is to increase the deliverable amount of supply,” Kelso said. “We’re going to immediately begin constructing the facilities to support the capacity necessary to start the development.”

As NBU works with Mayfair to construct the infrastructure needed to support the development and the surrounding community, Taylor said work will continue to identify available water resources ahead of future growth.

“We plan for areas like this to develop,” Taylor said. “And we capture that within our water resources plan... From there we go acquire watersheds or water resources to make sure that we can serve [the community].”

In addition to the development and utility agreements, Mayfair has also contracted with the city of New Braunfels and Comal County Emergency Services District 7 to provide police, fire, trash and emergency medical services, Rutherford said.

Because residents of Mayfair will not pay city taxes, they will not have access to city services so the contracts allow the development to pay for the personnel they need.

Property has also been allocated within Mayfair for the future construction of a fire station, Rutherford said, and eventually he anticipates the city will annex the property into its city limits.

Rutherford said he anticipates the first homes will be completed in 2023, along with some roads and utilities infrastructure.

Several public parks are also among the first projects scheduled to be developed, and Rutherford said those spaces will be available for the broader New Braunfels community to access.

Once development begins, Rutherford said it will likely follow a consistent schedule of construction as infrastructure, homes and commercial properties are added to the project.

“All of this infrastructure has to get built in order for us to grow smart, to be resilient,” he said. “There is a lot of trust that [city officials] have to put in us that we’re going to go do that. But the way the agreement is put together we either do it or we don’t get to keep moving forward.”
New Braunfels Development
SHARE THIS STORY