How Comal County and New Braunfels reacted to the coronavirus pandemic

On March 13, when Gov. Greg Abbott declared a state of disaster in Texas, New Braunfels Mayor Barron Casteel said he hoped residents would look back one day at the impending crisis and say the city overreacted instead of underreacted.

For Casteel that would be a measure of success that signifies a minimal impact of the pandemic on a local scale, but with two deaths and an accelerating rate of infection, it is impossible to know what lessons will be learned from the city and Comal County’s handling of viral countermeasures.

“At this point, I would tell you that my hope is that everyone—as many people as possible—would stay at home,” Casteel said in a phone interview.

Casteel’s initial response to the coronavirus was a closure order—issued one day after the first case of the virus was confirmed by the Comal County Office of Public Health—that affected every business in New Braunfels to varying degrees.

“We create rules for the unreasonable actor, not the reasonable one,” Casteel said.
RELATED STORIES

• Hinman Island's restrooms to be torn down and rebuilt

• Comal County Recycling Center runs out of mulch, but is working to restock

Restrictions put into effect to slow the spread of the coronavirus have ebbed and flowed over time, causing confusion as to why some businesses would be made exempt from closures, but Casteel said changes to orders have been determined by advice from medical professionals.

Some businesses have been deemed essential and made exempt from closures after initial orders went into effect.

Due to concerns over constitutional rights, Texas Attorney General Ken Paxton issued a ruling that gun sales could not be prohibited.

Bail bond services were also made exempt in a supplemental order from the city.

The most controversial rollback of coronavirus closures was a supplement to the city’s stay-at-home order—originally issued March 24 and amended April 1—that allowed religious services to be carried out in person, although they had by and large been moved online before March 24.

New Braunfels and Comal County had no say in the matter, as an executive order from Abbott issued March 31 superseded local orders to permit religious services to resume in a limited capacity.

So far, local houses of worship appear to have not taken advantage of the mandate.

“We’re concentrating right now on the things that are necessary,” Casteel said. “We are trying to come up with resources so that people can isolate themselves and recover.”

Comal County has been more passive than New Braunfels in taking firm action against the coronavirus.

County Judge Sherman Krause signed a stay-at-home order April 3, the day after the county’s director of public health, Cheryl Fraser, told the Commissioners Court that the local spread of the virus was in a phase of acceleration. 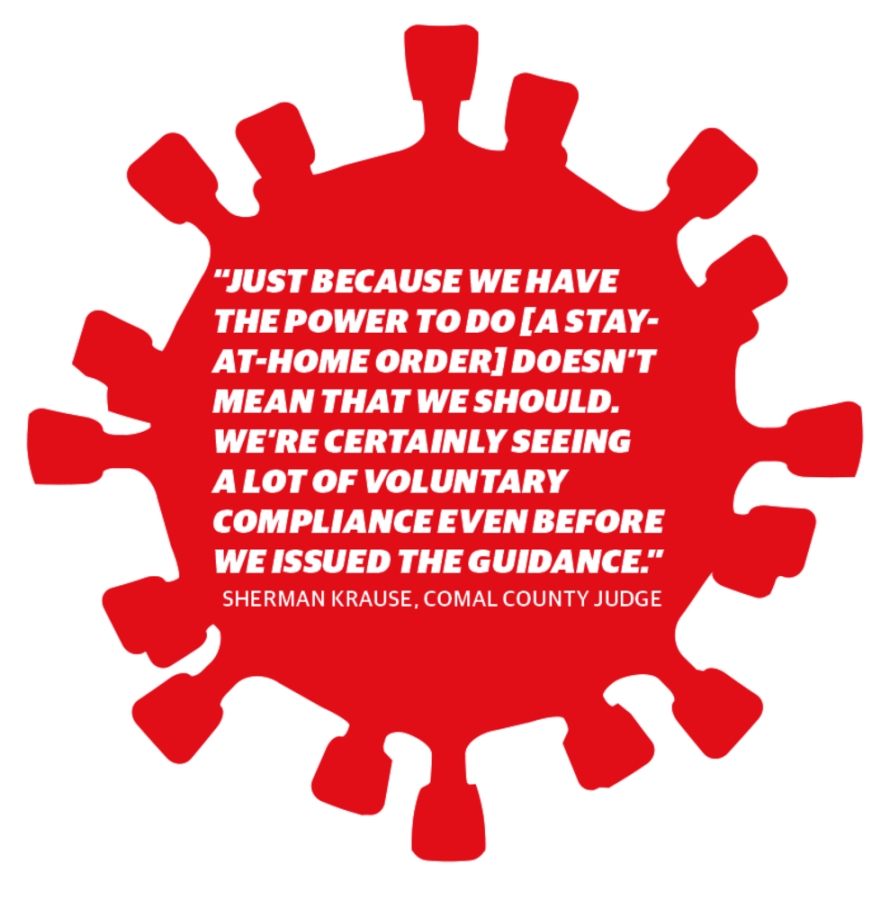 The county had previously announced April 1 that it would begin enforcing the governor’s stay-at-home order April 2. Only voluntary guidelines had been issued by the county before April.

“We evaluated all of the things that were going on in the county, and up until April 3, we had few positive cases coming in, even with the increased number of tests that were being administered,” Krause said in a phone interview. “Most of them still are coming in negative, but we did have a string of days that we had quite a few.”

The first instance of a patient contracting coronavirus through community spread, and not from travel, occurred March 27, four days before the county announced it would enforce the governor’s order and six days before it issued an order of its own.

“We don’t want to disrupt normal daily life any more than we absolutely have to, but the public safety and public health is our primary criteria for evaluating any actions that we take,” Krause said.

Several Texas counties issued stay-at-home orders much sooner, though. To the north and south, Hays and Bexar counties issued their orders more than a week before Comal County.

On March 26, two Comal County residents died from the virus, although one was not confirmed as a coronavirus death until March 30.

The question now is how many deaths can be prevented.

As the public health crisis grows, government leaders are also in a precarious position with the local economy as it struggles more and more the longer the crisis continues.

“The economy is taking a big hit no matter what we do at this point,” Krause said.

An economic stimulus package is on the way from the federal government, but in the meantime New Braunfels’ tourism-based economy is being hit especially hard by stay-at-home orders that will last through at least April, but could potentially be extended much further.

Rivers were closed to the public; many of the city’s 175th anniversary events were canceled or postponed; and more than 2,000 seasonal Schlitterbahn workers are without the income they plan for.

The Texas Workforce Commission reported more than 500,000 unemployment claims were submitted between March 16 and April 3.

There are some resources available, such as the Paycheck Protection Program that offers short-term loans to businesses that are forgiven if employees are kept on payroll for eight weeks.

Economic Injury Disaster Loans are also available from the Small Business Administration but are subject to interest rates of 2.75%-3.75%.

Court proceedings were suspended by all four of Comal County’s justices of the peace until further notice, which brought eviction proceedings to a halt—giving some residents a chance to catch their breath during the economic downturn.

In Guadalupe County, foreclosure proceedings were stalled for a minimum of 30 days in an amendment to the county’s disaster declaration.

As the crisis deepens, the government's work to protect public health has taken priority over the economy, while allowing businesses to operate as much as is deemed safe.

Success, however it is measured, has benefited from community members supporting each other.

“Our entire county has really stepped up,” Krause said. “We’ve seen organizations that are donating things to first responders, whether it’s meals or whether it’s personal protective equipment.”

Krause said he has seen businesses change their operations to protect employees and customers.

Some citizens had taken to sewing cloth face masks for others, according to Krause.

Dr. Judith Thompson and a group of volunteer medical professionals partnered with Comal County and the Comal County Medical Society to open a drive-thru testing center in New Braunfels.

“It’s a variety of community members who’ve all come together donating their time and resources to be able to meet the needs of our community,” Thompson said.

While the supply of testing kits is limited, the service is among the most affordable in the area, and any resident can ask his or her doctor to make an appointment.

“Everybody has just scrambled and done everything they can to pull this together very quickly,“ Thompson said of the volunteers. ”They’ve all been wonderful.”
New Braunfels Comal County Barron Casteel Sherman Krause Judith Thompson stay-at-home Coronavirus (COVID-19)
SHARE THIS STORY