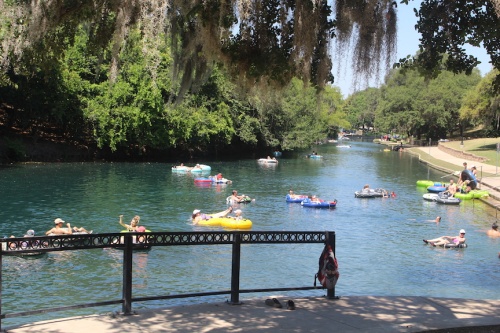 River Operations Manager Amy Niles provided the 2018 River Season Report to the New Braunfels City Council at its Sept. 24 meeting. It addressed items such as parking, safety and future initiatives.

The Comal River was easier to manage during the 2018 season in comparison to 2017, according to city River Operations Manager Amy Niles.

Niles provided the 2018 River Season Report to the New Braunfels City Council at its Sept. 24 meeting. She attributed the low Guadalupe River flow, a slow July 4 week, and increased awareness and compliance at entrance points as some factors for the change.

Judy Young, vice president of the New Braunfels Chamber of Commerce, also provided feedback to City Council during the presentation. The chamber helped with marketing for the season.

“The level of cooperation and ease of maneuvering through this season was unparalleled in the 23-plus years I’ve been doing this, so it’s a real step in a major good direction,” Young said.

“When you see that number, one thing to keep in mind was that there were so many people in the parks that were making contact with people before they even got into the park, much less into the water, with those disposable containers and coolers that education was really able to gain compliance long before there was any need for a citation,” Niles said.

Niles also reported that the city saw a 67 percent decrease in the amount of litter being pulled out of the river through a scuba contract during March through August. Numbers for the entire year are not yet available.

In 2014, City Council appointed a body called the River Advisory Committee to advise them on river-related matters. At the group's annual public input meeting on Sept. 19, Niles said attendees commented on the noticeable reduction in litter.

Niles noted that 75 percent of lot users paid at a kiosk, and 25 percent paid through the ParkMobile smartphone application. She said the city will continue to observe those trends.

During the presentation Niles shared that the Comal River Marker Program was a new addition in 2018, which included the installation of 78 signs so river-goers could easily identify their location to dispatch officers in the event of an emergency. Niles told City Council that a Guadalupe River Marker Program is also being explored.

This year's expanded life jacket availability resulted because of direction from City Council. During the 2018 season life jackets were provided free of charge seven days per week rather than just weekends and holidays.

Place 1 Council Member Shane Hines asked if the River Advisory Committee has discussed recommendations for requiring life jackets for children, to which Niles replied a safety study is being conducted this year.

“We’re waiting to hear back on what that consultant will recommend,” she said.

One drowning occurred this year, Niles said, and the victim was an adult.

Lifeguard statistics at the water slide known as the City Tube Chute also showed a decrease in lifeguard save and assist events from 2017. Niles said the change may be attributed to new training for the lifeguards and also reiterated the increased points of contact with city staff before hitting the water.

Niles concluded the presentation with a list of items the River Advisory Committee will be working on moving forward.

Mayor Barron Casteel requested for city staff to look at increasing parking options, especially on the entrance side of the Comal River.

In an effort to clean rivers post-season, the Dos Rios Watershed Cleanup will take place Oct. 13. Volunteers at the event will receive a breakfast taco, a T-shirt and lunch. Those who would like to participate can sign up at www.nbtexas.org/dosrioscleanup.
SHARE THIS STORY