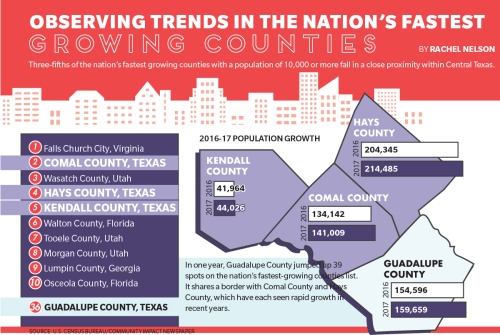 Three-fifths of the nationu2019s fastest growing counties with a population of 10,000 or more fall in a close proximity within Central Texas.

According to the latest U.S. Census Bureau data, Comal County ranked No. 2 in the nation for 2017’s fastest-growing counties with a population of 10,000 or more.

Comal County Judge Sherman Krause said if he were to guess, he would say the Hill Country environment is what is attracting people to his area.

“I think a lot of people grew up maybe visiting our area. If they’re retiring, they’re retiring to this area, or people who are getting established in their careers are moving here and continuing their career here,” Krause said. “We love it, and we understand it.”

“I think it’s the whole package,” Jenke said, adding, “We have two of the best school districts in the state, and I may be biased with that opinion.”

“It’s the way that employment has evolved to where people can work from home with distance working and learning,” he said.


An economy on the rise

When it comes to recruiting new businesses to the area, Jenke said New Braunfels has several target industry sectors.

“You don’t want to have all of your growth in one area,” he said, alluding to the automotive industry in Detroit. “When that industry went out, so did the city. Just like your 401(k), you want to diversify.”

However, a lack of existing large-scale industrial buildings and a shortage of large pieces of available land are two obstacles Jenke identified for attracting new businesses to the city.

While growth comes with certain economic boosts, a population influx can bring challenges as well.

“It puts some real demand on our infrastructure, including our offices, our courtrooms, all of those things that county government provides,” Krause said. “As you develop property, you impact stormwater runoff and those sorts of things, and all of those things are impacted by the growth that we have and it’s a challenge to try to keep up with it.”

At its April 5 meeting, the Comal County Commissioners Court approved an additional $4.4 million in funding for its $22 million Landa Building and Courthouse Annex renovation project, which will allow for a third court at law to be incorporated.

Krause said regional leaders have also gotten ahead of growth by being forward-thinking with transportation projects, specifically mentioning improvements on Hwy. 306 in New Braunfels and the city’s ongoing Loop 337 expansion project.

“It’s certainly a challenge to see where we’ll be if this is sustained,” Webb said. “I’m not going to pretend we’re full of answers. We’re doing everything we can to sort of mold growth to what the culture is here and try to understand we need to maintain who we are even though we’re in a constant state of flux. We have a very limited toolkit, but we do what we can as far as planning.”

Hwy. 46 east of I-35 is emerging as New Braunfels’ newest vein of rapid growth, and it connects to Seguin—the Guadalupe County seat. The route is lined with dozens of residential and commercially zoned “for sale” signs where property owners are cashing in on increased land values.

“That is where there is substantial rooftop growth is in the Guadalupe suburb of the New Braunfels city,” Jenke said.

“We’re on the cusp of really blowing up,” he said. “Land is getting expensive. Land is not as available as it was in the past, and developers and homebuilders want to be in this region. They’re starting to gravitate towards Seguin, so we’ve been out there marketing the city talking to these retailers.”

Schneucker said the city of Seguin works with the city of New Braunfels on economic development for the region, citing a primary focus as creating primary jobs in manufacturing, distribution, logistics, information technology and health care.

Additionally, the city of Seguin has expressed interest in annexing large agricultural properties within the New Braunfels extraterritorial jurisdiction. The city of New Braunfels has identified a few tracts of land it may be interested in negotiating a trade agreement for, including a location off FM 758 near the New Braunfels Regional Airport that would be strategic for future roadway extensions, namely the SH-130 toll road.

As the two cities continue to encroach on each other, Schneucker said his hope is to work together to stay ahead of the growth so they will not have to “play catch-up down the road.”

“To me, as long as we’re communicating with one another and communicating solid plans, we can really do our best to stay ahead of the growth,” he said.