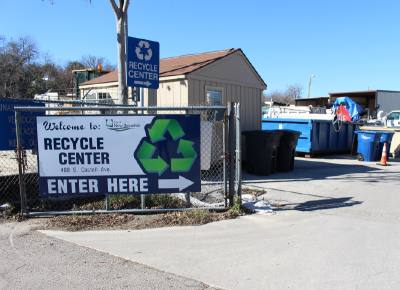 During fiscal year 2016-17, the city of New Braunfels saved $180,000 on disposal fees because of its recycling program.

“That’s the total amount of material that would have otherwise gone to the landfill if we didn’t have these programs,” said Catelyn Scholwinski, the city’s recycling coordinator.

Residents in the city who have a utility account pay $4.26 per month for curbside recycling services, which saved the city $280,000 on disposal costs during the last fiscal year.

Saving space is another important benefit to recycling, Scholwinski said, noting that it takes 500 years for a plastic bottle to decompose in a landfill. At current use, the landfill at FM 1107 and Kohlenberg Road has 16 years of life left and is the only commercial landfill between Austin and San Antonio.

“From a waste standpoint, it’s important to help preserve the environment we have left so we can extend the life of existing landfills,” said Mike Mundell, the city’s solid waste manager.

During FY 2016-17, 24 percent of the city’s recycled weight had to be disposed of because the material was not recyclable or was contaminated.

“My advice would be that it needs to be clean, as much as possible,” Scholwinski said. “Food is a big problem. When people put their whole pizza box in there that still has the pizza in it, paper is very absorbent, which makes it not recyclable.”

Hangers, plastic bags, hoses and diapers are among the common items that do not belong in a recycle bin, Scholwinski said.

In addition to curbside recycling, the city operates a recycling center downtown at 488 S. Castell Ave.

“Our recycle center itself, although it is very small in space, we offer multiple commodities that many other centers don’t have,” Mundell said.

Some of the equipment that Mundell touts is a plastic foam densifier—used to convert plastic foam to plastic—that is one of three that are municipally owned in the state, a cardboard compactor, an oil filter crusher and a vertical bailer that is used to bale recycling matter together.

The city also offers designated days of the year to recycle certain goods, such as electronics, bulky goods and household hazardous waste. The dates can be found here.

Another recycling option for New Braunfels residents is the Comal County Recycling Center, which averages 120 tons of household recycling items each month. Although the county does not offer curbside recycling services, James Tart, manager and director of the center, said there are six recycling pickup sites disbursed throughout the county. Click here for a complete list of drop-off locations and times.

According to Tart, brush and tire collection are the only services that carry a fee. The price of brush recycling “is minimal compared to the nearest landfill prices,” Tart said, and tires are recycled for $2 each. All other services are funded by the county general fund budget.

“All of us might not ever see the positive effects of recycling now, but the future will tell our story about how we recycled or not,” Tart said.
SHARE THIS STORY