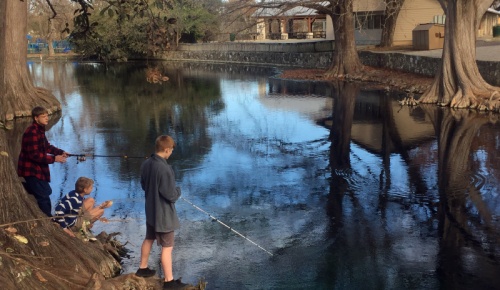 The largest city park in New Braunfels is Landa Park, where these teenagers were fishing along the banks of the Comal River.

As one of the fastest-growing counties in the nation with 10,000 or more residents, according to Census Bureau statistics, officials say land conservation is a topic of concern in Comal County. The Greater Edwards Aquifer Alliance, the Hill Country Alliance and the League of Women Voters of the Comal Area have joined forces to find a solution.

“All three of the groups are committed to continue working towards this end and any facet for planning for growth in Comal County because we think Comal County is a really special place, and we don’t want to lose that,” Greater Edwards Aquifer Alliance Executive Director Annalisa Peace said.

Peace, who worked with the city of San Antonio to locate parkland during a period of rapid growth, said now is the time for Comal County and the cities that fall within it to act.

“If you’ve already got the suburban development moving and then the commercial development follows that, it gets really expensive to buy land for parks and more difficult to find tracts that are even suitable for that,” she said.

According to information presented at a Nov. 28 special City Council meeting, the city of New Braunfels is facing challenges for open space. Falling about 500 acres behind the recommended service level for developed park acreage, the city currently has 4.69 acres of park land per 1,000 residents.

As the city works to finalize its comprehensive plan that will be used to shape its future through 2030, one of the proposed strategies for increasing the proportion of park acres is to ensure green spaces are within a five-to 10-minute walk or bicycle ride from every household in New Braunfels.

“The majority of our park land is in the center of the city right now,” said Stacey Dicke, parks and recreation director for the City of New Braunfels. “The fast-growing areas on the edges of the city limits are where we need to add park land, so I think opportunity exists to work with developers and make sure parks are included.”

The need for a county-wide umbrella group that combines individual interests is a common theme among area land-conservation enthusiasts. Although a large portion of the environmentally sensitive Edwards Aquifer Recharge Zone is located in Comal County, the reasons for preserving land go beyond water conservation.

“As more and more people move to our region, we are seeing more and more rooftops and fence lines and roadways and driveways, and it’s really having a pretty profound impact on our water resources—the quality and quantity—to things like wildlife habitat and the ability of our native wildlife to move across the landscape; to our view of the night sky,” Hill Country Alliance Executive Director Katherine Romans said. The HCA is an organization that works to preserve open spaces, water, and the unique character of the Hill Country.

Impervious cover describes land that is covered by concrete, asphalt or rooftops. A study by The University of Texas at Austin School of Architecture called “Toward a Regional Plan for the Texas Hill Country” explored land-consumption impacts and noted that from 2000-10, 77 acres of Hill Country land were converted to impervious cover for every 1,000 new residents.

Another voice in the Comal County land-conservation discussion is the Sentinel Peak Preserve, a nonprofit organization that is looking to raise $24 million to purchase and preserve 2,382 acres on Hwy. 32 known as The Devil’s Backbone. The property sits in Comal and Hays counties, and the Boy Scouts of America Sam Houston Area Council is selling the land, which has been home to the Boy Scout camp El Rancho Cima for more than 60 years.

Comal County is also home to thousands of acres of potential endangered species habitat, including the golden-cheeked warbler and black-capped vireo, two migratory songbirds that nest in Central Texas.

“What I think is unique to Texas is that we have these very unique environmental features from our parks systems to our aquifers to spring-fed creeks and rivers, so I think [that] challenge in Texas is fairly unique, and the solution has to be unique and driven by the local communities,” Romans said.


What are the options?

“If you have a landowner who says, ‘I have 600 acres, but I have three children so I want to make sure each child can build a house,’ they can negotiate that there are three homesites on the property so they all have their own inheritance or piece of the ranch,” Romans said.

The land value would decrease with a conservation easement because of development restrictions, but federal tax incentives help recover the loss. According to The Land Trust Alliance, a national land-conservation organization, a landowner can deduct 50 percent of his or her income the year of the donation and for the following 15 years, or until the value of the easement is recovered. A farmer or rancher may deduct 100 percent of his or her income with the same guidelines.

In other cases, Romans said resources may be available to purchase the conservation easement to pay the landowner for some portion of the reduction in land value. In all situations, the HCA encourages landowners to speak with a financial advisor or tax professional to understand the specific opportunities that may be available to them.

“Travis County just approved through a voter bond initiative $15 million for [parkland acquisition] and conservation easements within Travis County,” Romans said. “I think the county does have an important role to play ... for what they want their county to look like in the next 20, 30 and 50 years.”

A land-preservation meeting on January 17 was scheduled after the print deadline for this edition of Community Impact Newspaper. Goals for the meeting included discussing the formation for a potential coalition and how it would be organized.

According to LWV Chair of Land Use Committee Jensie Madden, identifying properties where owners could be approached for the possibility of conservation easements and gaining support from the county are key steps moving forward.