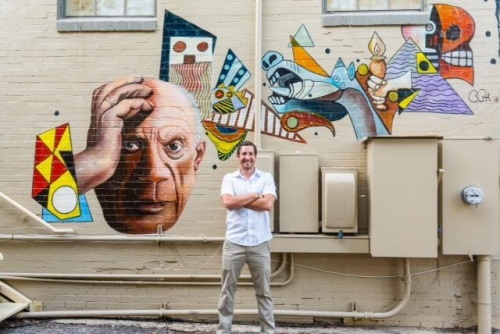 The portion of artist Buddy Pajak's mural found on the side of the New Braunfels Art League building portrays a portrait of Pablo Picasso and incorporates elements of his artistic style.

Painter Buddy Pajak’s artwork can be seen in notable locations such as Rio Vista Park in San Marcos and Rhea’s Ice Cream in Gruene. His most recent accomplishment wraps around two sides of the New Braunfels Art League building at 239 West San Antonio St. in downtown New Braunfels.

“I think support of mural art and community artwork is important because it allows not only artists to connect with the community, but it allows the community to experience art without having to walk into a gallery,” Pajak said.

When searching for an artist to execute the project, the New Braunfels Art League said it wanted the mural’s message “to celebrate artists for their influence on the arts, their inventions and contributions to society, and flamboyance.” The mural blends portraits of historic artists Frida Kahlo, Salvador Dali and Pablo Picasso surrounded by elements of their own unique artistic styles.

“They’re super influential; they’re recognizable; they’re interesting,” Pajak said. “I tried to make their art sort of part of themselves, so Frida has the flowers sort of coming around everywhere, and (with) Dali I took some parts from a few of his pieces … so I just sort of melded the two together—the artist and the artwork into one thing.”

Pajak, who describes his style as “comic bookey,” using line quality and heavy-blended colors, said he had never painted a portrait of a human before this project. He also had to work around the challenge of an unconventional canvas—painting around electric panels, a door awning, light fixtures and windows.

“Right off the bat I was like, ‘Well I don’t have a square canvas, so how are we going to change this up?’” Pajak said. “The wall itself has a lot of really unique, interesting qualities that you can pop out by sort of not painting on them.”

Pajak said he worked with the objects on the walls and left intentional empty spaces, which he feels drums up an interest for the surrounding artwork.

“And it allowed me to focus and really put my effort into the characters themselves,” he said.

The New Braunfels Art League officially unveiled the mural at a reception Aug. 21. The cohesive piece is splayed across the back and side wall of the gallery, and Pajak said he spent about six weeks and 180 hours on the project.

“We wanted to create a sense of movement where you sort of want to follow it with your eye or with your body to walk around,” Pajak said. “The intention was sort of to draw people in and really kind of force them to engage.”

As an artist Pajak said he enjoys connecting with others through his work.

“You get to kind of continue talking to the community without having to actually be there,” he said.